The Idiot is absorbing for 50 pages, the next 50 pages drag, and the rest is a slog. I read it because Batuman wrote the hilarious The Possessed: Adventures with Russian Books and the People Who Read Them, which is an essay collection in which most of the essays are… 50 pages. Maybe not coincidentally. Read The Possessed or, even better, Donna Tartt’s The Secret History instead. You will find that in The Idiot

I had never heard of any Ottoman invasion of Hungary. As a child, I had been told that the Turks and Hungarians were related, that the Huns were Turkic, that both peoples had migrated west from the Altai and spoke similar languages. 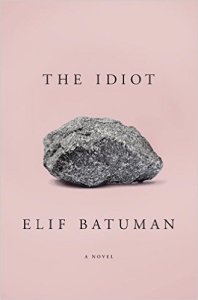 In some ways the novel is about all the things the narrator, Selin, has never heard of. The novel captures well the feeling of not knowing anything, surrounded by others who don’t, but is that desirable in a novel?

There are implied problems in industrial and human organization, too:

The Constructed Worlds syllabus was a list of Gary’s favorite books and movies, without any due dates or assignments. We were just supposed to read books, watch movies, and discuss them in class. The discussions were never that great, because everyone chose different books and movies.

That seems predictable. Learning thrives off the right balance between order and chaos. Lean too far in either direction and things fall apart.

Much of The Idiot is an extended, awkward flirtationship between Selin and a slightly older guy named Ivan. Watching shy college students flirt for short periods of time is painful; watching it for hundreds of pages may be worse. Sex makes an appearance here and there:

“Sometimes I wonder about the man I’ll eventually lose my virginity too,” Svetlana continued. “I’m pretty sure it’ll happen in college.”

Yet for relatively well-off and fit college students, the characters seem to spend strangely little time wanting to get laid, maybe because Ivy Leaguers are too uptight or wrongly focused to do so. Ivy Leaguers have a reputation for being too neurotic, cerebral, and obedient to do it much, but I don’t know if that reputation is deserved or accurate.

Still, Selin is aware of some of her own position:

In the train station, people were drinking coffee and reading newspapers. I felt glad to see that life was going on—actual life, where people were working and staying awake and trying to accomplish things, which was the point of coffee.

About two-thirds through I skipped to the end and began to read backwards, wondering if maybe things would improve. No luck. It is very long for what it is. So much promise. In some ways the novel delivers what its title promises, however, and many of the individual sentences are well done. Still, if you want a college novel try Joe College instead, after you finish The Secret History. If you have recommendations for college novels, leave them in the comments.