* Delta-V by Daniel Suarez is an SF novel with an SF novel’s typical poor writing. The second chapter begins with the scene: “The United States Senate Appropriations Subcommittee…” is in Washington DC. Two paragraphs later, “Three US senators sat…” Well, yes: would they be Mexican senators? Or Knesset members? Can’t we assume they’re US senators? Clumsy writing on almost every page made me give up, like “That meant eighteen people were definitely going into space on Joyce’s dime. Tighe hoped to be one of those people.” Suarez doesn’t need “of those people.” These basic errors are representative, not cherry-picked. Don’t be fooled, as the interesting premise can’t be sustained into a good novel because of consistently low prose quality.

There are some good moments; in one scene, on the first asteroid to be mined, two characters discuss creating metal parts via chemical vapor deposition (CVD):

“It’s existed since Ludwig Mond invented it back in 1890.”
“I’ve honestly never heard of it.”
“Back on Earth it’s less toxic to just use a blast furnace. Up here in space, though, CVD is going to be critical for precision manufacturing.”
[…] “It’s like alchemy.”
“No, it’s better than alchemy—it’s science.”

A fine point too rarely encountered, and a high end to the chapter. 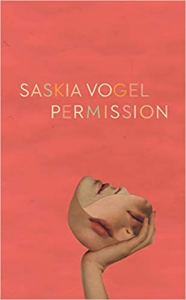 * Permission by Saskia Vogel, an okay book but its timeline seems somewhat random and muddled to me. Too many novels are in the improbable reaches of the movie/TV glamor industries; people substitute “hope” for wages in those industries, with results that are often not good. In this novel, a dominatrix conveniently moves next door to a woman who becomes interested in her. Rather than what you may be thinking, more of the novel is like this: “Everything inside me, ocean. I inhaled with both my nose and mouth, greedy for air, feeling my lungs expand. My body was mostly water, but only mostly, still” than like this: “I was wearing a semi-sheer basque with a matching thong. He buried his face in my cleavage,” but there is some of both—like life, one could argue.

You have to be okay with the one-sentence paragraphs:

Only her.
Only this.
Only now.

So deep, man, right? Pass the joint. I didn’t regret reading it but am not sure it’ll stick with me, or most people. You could say that Nine and a Half Weeks got there first and is still colonizing this territory.

* I read Stephen King’s The Stand when I was 11 or 12, and it holds up better than Robert Jordan but not as well as I’d like: it has moments—a rural cop describes how his wife “neatens” the cells, for instance, the word being wholly appropriate—but it has some howlers in it too, like the doctor who says:

They are the symptoms of the common cold, of influenza, of pneumonia. We can cure all of those things, Nick. Unless the patient is very young or very old, or perhaps already weakened by a previous illness, antibiotics will knock them out.

Colds and influenzas are viruses, not bacteria, and antibiotics don’t affect them. If anyone had a cure for the common cold, they’d be a billionaire. It’s conceivable that we could today have a vaccine for the common cold, but the regulatory structure put in place by the FDA doesn’t favor it.

Still, the paranoid style in it is depressingly modern (look for all the mentions of not just government failure but active malice), although in the novel the paranoia and distrust are correct. It could be contrasted with the movie Contagion in “Bureaucratic Heroism,” a great essay with an unlikely title. Today, it feels like a product of disillusionment from the Vietnam war. But excess skepticism may be as bad or almost as bad as excess trust.

It’s also still scary, when the prose doesn’t interfere with the fear.