Keep reading this book: the first three-quarters seem aimless, and I gave up. What’s at stake? Who gives a damn about this video game? (I also have an anti-video-game prejudice.) But enough people I admire recommended the book that I kept going, and I’m glad I did. 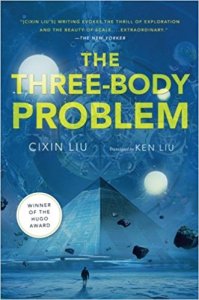 And after The Three-Body Problem, I read the next two which are in some ways structured similarly: somewhat meandering first halves followed by shocking reversals and revelations, culminating in a work of deep time that does not seem to break special or general relativity but does work with them.

The real terror here is not the many monsters of fairy tales, whether ancient or modern, but knowledge itself: “If even an extremely simple arrangement like the three-body system is unpredictable chaos, how can we have any faith in discovering the laws of a complicated universe?” Wang asks about two-thirds through the novel. I will not offer the answer, but I did read Martin Rees’s essay “Is There a Limit to Scientific Understanding?” just before re-starting The Three-Body Problem. One hopes there is no limit to scientific understanding, but that is a hope, not a guarantee.

In the “game” Wang plays in The Three-Body Problem, a civilization keeps being destroyed by perturbations in the orbit of three suns around a planet (hence the title). Each time he enters the world, he needs to observe or solve a problem in order for the civilization to advance—it’s a bit like the computer game Civilization or Age of Empires. Except this game seems to have unnerving, mysterious consequences in the real world.

Not much is explained, and it’s hard to identify the “missing” information pieces in the novel; The Three-Body Problem doesn’t seem to have rules, as other novels do. In a mystery novel, the implicit rules are there, and the killer is human, with human motives and values. He (usually a he, but not always) cannot destroy humanity itself. A mystery novel is like a war using conventional weapons. Unpleasant and miserable, perhaps, but unlikely to be existentially destructive. Nuclear weapons are different: they could be existentially destructive, and war with them is different. Some novels seem to have no internal rules and no guarantee that the good guys will win, or even that any guys will survive. These novels are existentially unsettling, and they tend to be classified as SF; Three-Body is one of them (Blindsight is another).

Initially the novel starts in China’s Cultural Revolution: “During those years, everyone had a special sensitivity for their own political situation. The sense was especially acute in Ye Wenjie. She felt the world around her closing in like a sack being drawn shut, and everything press in on her.” We may think the novel is about politics, and it often is, but science is its bedrock, for reasons I don’t want to elaborate here but that will become apparent over the trilogy’s course. The novel’s world depends on science, but also on the fear of contact with a more technologically advanced society. In Three-Body, Wang finds that “This civilization seems to have developed to a very advanced state.” The implication being, of course, that it may soon be destroyed.

Some spoilers follow. In later books, the possibility of civilization extinction is explored and occurs. The third book in the series, Dearth’s End, finds that one threat had, from humanity’s perspective, “lasted close to three centuries [. . .] yet what took its place was an even crueler universe.” People—in the broadest sense possible—who don’t struggle and win, die. There is no long-term respite from competition.

We don’t often see modern fiction imply this. A nonfiction book like Zero to One may, but most who read Zero to One aren’t seeking its darker depths. Perhaps we should go there.

If you read The Three-Body Problem, don’t give up halfway through, as I did. Often, when the book (and not just the first one) seems like it’s at best dully meandering, something shocking happens. That sense of complacency and direction shattered happens again and again, perhaps as a metaphor for life. I don’t fully understand the extensive metaphoric readings the books could be given, and that’s good news: they’re rich enough for re-readings and many readings, in a way many books aren’t. There are also many sub-genres of science fiction stashed in it, ranging from first contact to deep space exploration to the many-worlds theory.

Some things remain strangely absent—we don’t get AI centuries from now?—but they can be ignored because there’s so much on the page.