V.S. Naipaul as a character in a novel would be unbelievable because his hysterical obtuseness would seem unrealistic; no one would want to read a book about him, especially as he’s seen at the beginning of Sir Vidia’s Shadow. Only Theroux’s perspective makes this one readable. Many greats are ornery—one favorite depiction is Dr. Swenson in State of Wonder—but this one seems not great enough to justify his orneriness; if I’d been Theroux I think I would’ve given up at or just after the first meeting. Phrases like, “Who needs all that negativity?” are overused and have been corrupted by New Age morons, but reading about Naipaul one does have to ask: Who needs all that negativity?

State of Wonder is a good comparison. Switch the literary examples for scientific ones and the sexes and this could be Swenson:

He knew his own mind. He knew what he wanted. It was clear that he would not find what he was looking for Uganda — anyway, he had already given up on us. He had impossibly high standards. He said there was no point in having standards unless they were high. He did not compromise. He expected the best, in writing, in speaking, in behavior, in reading.

Sir Vidia’s Shadow sometimes reads like a parody yet isn’t one. One sees the contradictions in Naipaul, in Theroux, and their relationship pop up; the many brilliant scenes the beginning of the memoir eventually set up this, which doesn’t occur until page 71:

I was just a young man in Africa, trying to make my life. He was one of the strangest men I had ever met, and absolutely the most difficult. He was almost unlovable. He was contradictory, he quizzed me incessantly, he challenged everything I said, he demanded attention, he could be petty, he uttered heresies about Africa, he fussed, he mocked, he made his innocent wife cry, he had impossibly high standards, he was self-important, he was obsessive on the subject of his health. He hated children, music, and dogs. But he was also brilliant, and passionate in his convictions, and to be with him, as a friend or fellow writer, I had always to be at my best. 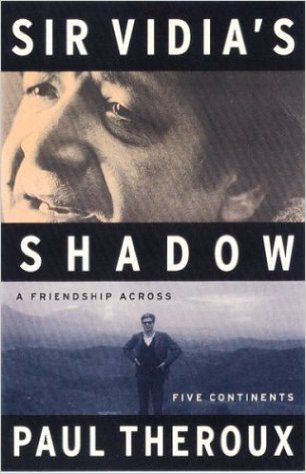 A few people hate children, a few more hate dogs, but music? Almost no one hates music, not even me, who is not the most musically inclined or astute person alive. One gets the sense in this paragraph too of how irritating Naipaul can be: the repeated “He was” begins to weigh, like a literary weight, as it and variations on it is repeated, until the relief of the “But” that tells us the good sides of Naipaul, the shining sides, the reasons one would want to be around him.

Sir Vidia’s Shadow can be read many ways, which is one of its pleasures. It can be read as Theroux’s education in humanity; Naipaul is like no one else yet still somehow manages to operate somewhat. Theroux is educated in other ways. He is educated in the literary marketplace, which is brutal and poorly remunerated. He learns other things. At the beginning of the book Theroux’s lover is immediately eager to have his baby. After their three-month romance both discover she is four months pregnant. The lesson is clear yet it seems to be one each generation must re-learn.

What else? As noted in the preceding paragraph the book is about many things; being a writer is one, and peppered throughout we learn about writers’ struggles. Naipaul goes off on a journalism assignment that “meant breaking off work on his book, a hard thing to do.” Yet Theroux “was teaching every day and also working on a novel, so it consoled me to hear about his interruptions.” “Consoled” is an interesting word here, with its implication of grief or disappointment assuaged. Maybe teaching every day is a grief, but finding someone else in a condition of grief may make us feel empathy, but there is also a little notion, a whisper, of small-minded competitiveness here.

Maybe the best thing about Sir Vidia’s Shadow is the way every word feels essential, deliberate, chosen. It demands and rewards close attention the way too few books I’ve read lately do. Those that demand attention because of the quality of their sentences often have dull or empty plots. Those that demand attention because of their content often have dull sentences. Sir Vidia’s Shadow brings together both sides—or should I say “brings both sides together?” After reading such a book, the answer matters again.

Still, I keep noticing the struggles, especially about money. There is rarely enough of it and the principles do shockingly large amounts of work for shockingly small amounts of money. Scenes of privation are too frequent to quote at length, but I will give one touch from midway through:

My strategy has been to write and survive that way; my strategy was not working. A novel, a book of criticism, scores of book reviews, a collection of short stories — this in less than a year had produced such a paltry income that I was grateful to my wife for getting a job. Now I was at work on my seventh novel. . .

Grant writing may be hard but it is not so hard as this. The artists’ struggle with money is an old story and one told too rarely in schools. Reading about Theroux’s struggles also make me wonder how many writers and would-be writers are out there, living like Theroux, but never quite making it, leading them to mid- and late-life bitterness at their own struggles and fiscal catastrophes.

Some moments are useful in the age of distraction: “At the age of thirty, I had my first telephone.” One senses a conceivable link between that and the novels written.

I will not give away the end, which is hard to read and more emotionally powerful than one might initially expect. There are shades of the end of Michael Lewis’s much more recent book The Undoing Project. There is something powerful and terrible about broken friendship, which is beyond even the terribleness of romantic breakups. But breakup and breakdown is in Sir Vidia’s character. One sees it throughout the book. Theroux knows as much and takes his risks. In fairy tales and mythology it is rare that a mortal who consorts with supernatural beings comes out of the encounter, be it brief or be it a marriage, well. Sir Vidia’s Shadow is not a fairy tale but it has elements of the fairy tale in it, and one sees that the long friendship teaches Theroux much, yet the friendship cannot forever endure Sir Vidia’s nature.