Chaos Monkeys is supposed to be refreshingly honest but instead feels slimy; it feels like Martinez is ripping off other people’s good will and earnestness, which is deeply unattractive and raises the urge to altruistically punish. Martinez is aware of it enough to cite it but not enough to surmount it:

Cynicism is the last refuge of the shiftless. I don’t cite this absolutist tendency for the cheap sardonic joke, the asshole hipster who’s too cool for school to believe in anything. No, I cite it because I was as seduced as the next guy sitting there in Pong [the Facebook conference room], perhaps even more. 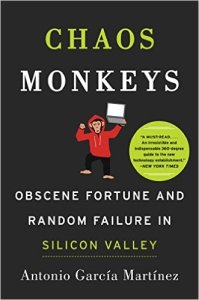 The sentence-by-sentence is okay and the content is often interesting. There are details of the ad world I didn’t know about and details about the startup world most people won’t know about. Then there are parts so conceptually and linguistically confused and muddled that I want to take back compliments like “okay” and “interesting:”

This was the major-league, serious shit, take-on-prisoners championship of thee tech entrepreneurship, and if you were going to play, you’d better show up ready to bite the ass off of a bear.

So the sentence moves from sports, to abstraction mixed with the scatological, to warfare, back to sports, to companies, to sports, and then to nonsense. It sort of works as long as you don’t pay too much attention. Chaos Monkeys rewards inattention. But you can’t get away from tone, which wafts through the book like a foul odor from a superficially attractive person. I don’t want to snark at others; I want to know, and Martinez makes snark seem like knowing, which may bedazzle or bamboozle the young or unwary but should put off the people who are building the future, not just manipulating social status symbols.

Like so many stories, the book is also about the madness of coastal real estate markets; in one year Martinez makes a million dollars, which in San Francisco feels justifiably middle-class due to outrageous land-use restrictions that drive up the price of housing and income taxes. I live in New York, which is afflicted with similarly maddening maladies that some subset of voters nonetheless likes.

Sections of the book are inadvertently revealing, which describe problems with the higher education system and the signaling madness that has overtaken it:

it would be my Facebook stock vesting yet to come that would pay for private high schools and Stanford, so Zoë and Noah wouldn’t have to sneak into this country’s elite through the back door from the cattle class, as I had to do.

Ignore even the extraneous “do” at the end of that sentence, as it should’ve been edited out. So much is wrong with that sentence and the mind behind it that my own mind boggles. Let me ignore most of it and I wonder if Zoë and Noah would prefer $300,000 in cash at age 22 rather than private high schools and Stanford. I know I would!

By far the worst part about Chaos Monkeys is that it’s an okay book within which there’s a great book—written perhaps by Tom Wolfe. Wolfe’s books reward attention. The more attention you give Chaos Monkeys, the more its weaknesses show.