You know The Song Machine is going to be good from the fourth page, in this close reading of the song “Right Round:”

The nation was near the bottom of its worst economic collapse since the Great Depression, but you wouldn’t know it from “Right Round.” Like a lot of CHR [Commercial Hit Radio] songs, it takes place in “da club,” where Pitbull oils his way around the floor, calling women “Dahling” and remarking on their shapely behinds. The club is both an earthly paradise where all sensual pleasures and the arena in which achievement is measured: the place where you prove your manhood. 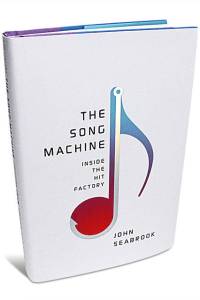 The understatment from the “Social realism” sentence is enough to express skepticism but not so much as to be overbearing. Seabrook is good at, over and over again, hitting the right description and the right tone. He notices much and picks the right things to make readers notice along with him; his restatement of the place of da club makes da club seem ridiculous, but in a way that’s easy to forget in the context of the fantasy of a song. Seabrook pierces that fantasy like a finger through a bubble, yet the image of the club as paradise remains, and it remains enough to enchant millions of people into clubs every weekend. I’m not a routine clubgoer and to my eyes da club seems to not be a place of great happiness to most people, most of the time, unless they’re made artificially happy—as Seabrook says of the songs his son likes, which seems both a short and a long way from the “soulful ballads played by the singer-songwriter” he listened to:

The music reminded me a little of the bubblegum pop of my preteen years, but it was vodka-flavored and laced with MDMA; it doesn’t taste like “Sugar, Sugar.” It is teen pop for adults.

I don’t care much about pop music and yet this book made the subject fascinating. Comparisons between Seabrook and John McPhee, another master of making many topics mesmerizing, are apt. Though I may not care especially about pop, I hear it and sometimes like it and know how universal it is. A few times in discussions with students, alcohol’s effects on characters in novels and stories have arisen, and I sometimes write on the board, “Blame it on the a- a- a- a- alcohol:” Most students know, immediately, the reference, and laugh.

Who are the hit makers? They are enormously influential culture shapers—the Spielbergs and Lucases of our national headphones—and yet they are mostly anonymous. Directors of films are public figures, but the people behind pop songs remain in the shadows, taking aliases, by necessity if not choice, in order to preserve the illusion that the singer is the author of the song.

The Song Machine seeks to change that, but Seabrook also fingers an important reason why hitmakers stay away: the “illusion” that must be preserved, insofar as possible, or at least not have attention drawn to it. We seem to want the illusion, or, more likely to not care how the song is made: only that the sound is good, regardless of whose hands and ears it passes through before it gets to us.

I’m probably just too old to be the target audience for most pop music, and even when I was in pop’s demographic sweet spot I found much of it annoying—not out of allegiance to weirder and more interesting music, but because I’m not that musically driven a person. To me, most music boils down to, “I’m romantically desirable” or “You done me wrong” or “I’m better than my romantic rival,” or some combination thereof. They’re sentiments I of course agree with—we all do, which is why it’s pop—but at some point I’d prefer a wider array of ideas, sentiments, or emotions. Yet that wider array isn’t easily expressed in three-minute intervals. These views are pretty weakly held, but they are mine, for now at least, and apparently almost no one listens to the lyrics and wonders what they might mean. The market for people who want lyrics that might make sense is small, though maybe larger than the market for contemporary poetry.

There are many fascinating details in The Song Machine. The three-woman group TLC rejected the famous Britney Spears song “Hit Me Baby (. . . One More Time).” Oops. Spears captured the zeitgeist for years and in some ways still has it. Her image was in many ways a lie but in a few ways real: she knew that a video that portrays her as a sexy schoolgirl checking out “hot guys” was wiser than what an industry veteran proposed. Still, that’s a rare example of the amateurs winning over the professionals; one subtext of the book is that, most of the time, professionals win: that’s why they’re pros.

Spears, by the way, later rejected the song “Umbrella,” which launched Rihanna’s career. Why? “In trying to fathom how Britney could have rejected ‘Umbrella,’ Tricky notes drily that ‘her personal life was . . . a little out of control’ at the time.” She may never have heard the song.

Another detail, this time about Asia, from the chapter on K-pop:

In a classic example of ‘soft power,’ Korean cultural exports erased South Korea’s regional reputation as an unsophisticated emerging industrial nation and replaced it with images of prosperous, cosmopolitan life. Thanks to Winter Sonata middle-aged Japanese women now swoon over Korean men, while complaining about the ‘grass-eating—that is, lacking in virility—males of Japan. Korean ancestry used to be a stigma in Japan; now it’s trendy.

Many, many parts of The Song Machine reminded me of Tyler Cowen’s Average is Over; the latter book is about topics far removed from pop music, but in many respects The Song Machine can be seen as a specific application of the general principles Cowen describes. For example, Seabrook writes, “Whole subcultures of musical professionals—engineers, arrangers, session musicians—are disappearing, unable to compete with the software that automates their work.” Yet those who can work effectively with software, like Denniz PoP, Max Martin, and Dr. Luke, can still make enormous amounts of money and have influence that is in some ways vaster and longer term than virtually any musician who came before them. At the same time, though, it is hard to say what many modern artists stand for, apart from the party:

On sheer vocal ability, the new artists fell short of the pop divas of the early ’90s—Whitney, Mariah, Celine. And who are these artists? Britney? Kelly? Rihanna? Katy? Kesha? What do they stand for as artists? Their insights into the human condition extend no further than the walls of the vocal booth. And who really writes their songs?

The Song Machine answers that last question. As for “sheer vocal ability,” that doesn’t matter as much in a Pro Tools and social media age (though it still matters somewhat: Rihanna is initially feared to be too “pitchy” to make it as a singer). The social media age may not seem to affect the need to have a great voice, but social media means that lifestyles, persona, and image are relatively more important than they once were and, in many respects, harder to control. Being “harder to control” and of great importance means that stardom selects for the ability to control persona and image. The selection filters change.

Consider, for example, Rihanna being beaten by her ex-boyfriend is in The Pop Machine a crisis of investment: Rihanna had already had millions of dollars and much valuable, irreplaceable time and attention put into her. Being hit by her boyfriend threatened to undo that (the reaction of her fans may also say something important about the influence of contemporary “feminism,” although what that may be I’ll leave to the reader).

But back to Average is Over: Seabrook recounts briefly how much technology influences the music industry when he writes that in the 80s and 90s “Other song-making machines arrived—Roland and Prophet polyphonic synths, the Linn drum machine, Fairlight and Synclavier samplers. The ‘MIDI’ interface between a keyboard and the computer . . .” We are our technologies, in all domains, even music, fantasies of purity and authenticity aside. And while we have the technologies they are not easy to use:

In 1997, Denniz [PoP] told a reporter, “It’s easy to say producing this music is equal to pushing a button in the studio. But that’s like saying writing a novel is a simple push of a button on your typewriter.” Denniz liked to say that no matter how technically adept you were at programming, sometimes you just had to “let art win.”

Letting art win is hard and sometimes unknowable. Much later in the book, Seabrook hears an early cut of a song and thinks it garbage, though he is too polite to say. It turns out to be Katy Perry’s song “Roar,” which goes on to be a number one. I’m oddly glad Seabrook doesn’t like it—I’ve heard it too many times and still find it insanely annoying—but its sheer popularity remains.

The Song Machine is best read with Spotify open.

I finished it, turned it around, and re-read it.