I’ve already reviewed The Fever—it’s just under the title Dare Me, with its similar subject matter (high-school girls, transformation, darkness in women, sexuality) and style (half-knowing, unwilling to admit, chopped up narrative). This is not a criticism, Dare Me readers who want more of the same will find The Fever delivers. Like Dare Me the principle concern is female rivalry over high-status guys and female judgment of each other’s sexuality. I won’t say it’s a critique of those topics, though it could be read that way. It could also be seen as a commentary on the eternal conflict between children and parents.

Similarity is not always a bad thing—Elmore Leonard’s many caper novels consistently delivered similar characters, styles, and plots, and again that could be read as weakness or strength as he played with variations around a central concern or set of concerns (which I read as coolness and silence—subjects for an academic paper yet to be written). 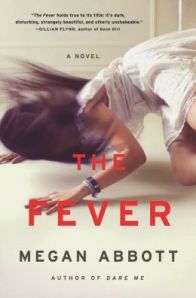 There is a Paglian tinge to Abbott’s last two novels (sample: “In the school’s hallways, Tom could see it: Gabby carried the glamour of experience, like a dark queen with a bloody train trailing behind.” Unlikely, but poetic, and it tells us about Tom’s overwrought perspective). They may be of less interest to those far from high school or offspring in high school. Abbot is willing to probe darkness in a way rarely seen in TV or movies, which tend to lag books by decades in terms of their willingness to portray what lurks within. Even the better TV stations like HBO and Showtime need to appeal to “Heads of Households,” which explains why the teen series tend to be on network TV or basic cable.

There are comparisons to be made with Caitlin Flanagan, and Abbott wins them; Flanagan’s book Girl Land was published in only 2012 and already the hardcover is justifiably available for $.01 from Amazon. I think I read a library copy. Both the Flanagan essays and the Abbott novels show how little we tend to know about things when we’re young and have no context or framework for understanding them. One could argue that the knowledge for understanding the world is out there, and most teenagers choose not to access it. This leads to confusion. That confusion is reproduced to good effect in the narrative voice and structure of The Fever:

I’m next, Deenie thinks, a few minutes and it’ll be me.
If only she’d gotten it over with a year ago. But she’d heard about how much it hurt and no one else had done it yet, at least not anyone she knew.
Now she’s one of the last one.

The tense moves from present to past back to present, with the “it” deliberately ambiguous in that it sounds like sexuality but may actually be the fever of the title. Naturally hypocrisy appears too, with slightly incestuous overtones, when Eli thinks that “Since then, he could only ever think about his sister, one wall away. And how he hoped Deenie never did things like this. With guys like him.” To be thinking about his sister in this context seems like a mistake of focus. About some things there is little to say; people are people and want what they want, as teenagers are probably taught not to know or admit. The characters are also mostly ignorant: Deenie thinks, “Why did everything have to be about sex, she wondered. Didn’t it make a lot more sense that it was something else?” She hasn’t read or probably even heard of evolutionary biology or Darwin’s The Descent of Man and Selection in Relation to Sex. I hadn’t either in high school, and I don’t remember my first introduction, but I do know that a couple books on the subject made a lot of previously puzzling behavior fall into place. It’s true that not everything is about sex but so much is about it because we’ve evolved to pay close attention to matters relating to survival and reproduction.

Simple principles give rise to dizzyingly complex behaviors and patterns. Deenie doesn’t know that and in some ways her society conspires with her towards ignorance. One reading of Abbott’s last two novels could be as a move from utter ignorance to slightly greater knowledge. Jealousy is a perpetual companion because there are so few real status ladders to climb in high school (“Everything was so easy for Skye, with her older boyfriends, the way her aunt bought her cool old-time lingerie from vintage shops, the strip of birth control pills she once unfurled for them like candy.”) Skye, however, probably doesn’t think things are easy for Skye, but few high schoolers have the ability to get out of their own heads and into the heads of their companions. The last two paragraphs may be unfair, like saying that Faulkner is merely writing about the machinations of slack-jawed southern yokels who need education and functioning political infrastructure, but there is also some accuracy to them.

The question of whether the fever has supernatural, psychological, microbiological, or other origins does get resolved, but its mechanics are dubious.