How to Sell works, or at least the first half does while the second descends to melodrama. It’s a novel of surfaces and not an easily quotable book. The narrator notices but doesn’t do up the descriptions:

I should have known that as soon as the pitch started Jim believed the lines he was throwing me. It’s like being an actor or prime minister, you get all worked up with the audience and you think can can say nothing false or unbelievable. 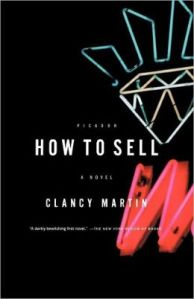 One could say many professions involve lying as a central component of the work; one could say that science does the opposite and is one of the only fields in which lying, while possible, is at least also discoverable. In How to Sell the narrator and his brother, Jim, work the jewelry business in a pre-Internet age, though I’m not sure how much the Internet has changed that business.

How to Sell starts with an Elmore Leonard-esque word slide: “Our father told it that Jim was caught dressing up in my grandmother’s black Mikimotos when he was scarcely two years old.” He “told it?” To who, when, how? It doesn’t matter since we don’t find it, but it and that weird “scarcely” tell us that the narrator isn’t quite level and maybe the story won’t be either.

Look, Bobby, the appraisal is not a lab report. [. . .] We are not calculators, we are people and so are our customers.

W’re people and we want to be lied to. The people who want the truth take the time to learn how jewelry works and the rest take the bullshit the salesman tells them. But information has a cost and so in some circumstances it’s easier to just do it without paying attention to the niggling gaps between details; a lot of romantic relationships function on the same principles as selling jewelry, as the novel makes clear since it is about how the one activity is a metaphor for another. Jewelry is a potent metaphor here because it’s also unnecessary: no one dies because they can’t wear it. As a pure luxury item it is sold as glamor, and one element of glamor is a lie plausible or well-presented enough to be believed.

No one in this book should be married or in a monogamous relationship, yet many characters are and their dilemmas would go away if they could undergo that simple change. But they can’t, or won’t.

Characters are constantly giving bad advice. One, a man named Kizakov, says “In this business, always trust your eyes.” Except that eyes can be deceived, which is why humans build so many tools to augment what we can see. Our senses should be verified rather than trusted; in this way do they also resemble lovers? In that domain broken promises may not be the norm but the evolutionary and other pressures are so strong that everyone at least knows stories about crumbling and breakage and base metals.

Jim gives brotherly advice: “Sometimes it’s better to stay on the surface with somebody.” People who say that often mean, “Stay on the surface with me.” Jim is a man of surfaces more than most people, and when he stays “on the surface” he means that he’ll do what he wants, when he wants it, and you’re only “in” with him to the extent you can do something for him. For men that means selling and for women that not surprisingly means something else.

The owner of the store, Mr. Popper, has a post-modernist view of the truth, as when he says that “It don’t really matter [what’s real and what’s fake], so long as she’s done right.” The similarities to love are again obvious; the bad outcome for Mr. Popper is also not surprising.

* There is more in common with selling jewelry and religion than is commonly supposed.

* To some extent no one knows anyone and that fact continues to drive fiction.