Despite what I wrote in this post, I got a copy of Effi Briest. And you know what? I couldn’t finish it. There were some great lines—my favorite is Effi’s father saying, “There’s nothing so good for one as a wedding, provided of course it isn’t one’s own”—but I couldn’t take the rest, even though I stopped reading the very nice introduction by Helen Chambers after realizing it was prejudicing me against the book:

The sexual dimensions of the age gap [between Effi and her husband] remain beneath the surface of this discreet and allusive novel. They are suggested, as is much that is vital in the inner action, by the symbolic texture of the narrative. Effi’s sexual inexperience at the beginning of the novel is beyond question, and the premature loss of her virginity is prefigured by the twins calling her back to the garden through a window framed by Virginia Creeper

This explains why little seems to happen, since “remain beneath the surface” feels like another phrase for “buried so deeply that you need an even dirtier mind than mine to excavate it. In a Paris Review interview, Robertson Davies says:

I do not respond quite so immediately and warmly to writers in the United States, because their concerns are different from mine and their approach to them is different from mine. They seem to be infinitely concerned with very subtle details of feeling and life. I find this exemplified, for instance, in many stories in The New Yorker where whether the family will have pumpkin pie or something else on Thanksgiving Day is a decision with infinite psychological and sexual repercussions. I take this quite seriously. I admire their subtlety—but I get so sick of it. I wish they would deal with larger themes. 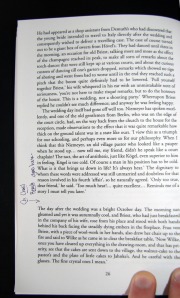 With enough subtlety, substance disappears, and I love his characterization of American Thanksgivings as portrayed in stories. Anyway, Chambers also says of Effi’s husband, “It seems that after years of self-discipline and mortification of the flesh Innstetten has regulated his natural urges into a state of atrophy.” In the margin I wrote, “Yawn,” a judgment that still seems reasonable a week later. Practically the entire text of Ian McEwan’s On Chesil Beach could fit between the end of the wedding scene on page 26 and the next paragraph, which begins, “The day after the wedding was a bright October day,” as if one of the presumably major events of Effi’s life hadn’t just happened. And I’m not talking about the wedding.

I was thinking about Effi Briest when I read Samuel Delany’s Paris Review interview in the Summer 2011 issue. He talks about two characters in his work Nova who almost have an incestuous relationship. The interviewer begins this exchange:

Did you intentionally want to make something the reader could only speculate about, rather than be certain of?

Delany: Certainly as far as the incest goes. Suggestion is a literary strategy. But when, in 1968, works like Henry Miller’s Tropic of Cancer and Black Spring and Lawrence’s Lady Chatterley’s Lover were legal to publish and sell in this country, the age of innuendo and the coyly placed line of white space, as the hero envelops the heroine in his arms, ended. Fifteen years later, AIDS rendered them permanently obsolete.

Today, I watch seminar rooms full of graduate students misread both [Alfred] Bester and [Joseph] Conrad, because they no longer have to wonder about the possibility of such illegal elements occurring in the story and the compensating possibility of suggestion as a writerly strategy for representing sex and violence.

I am one of those graduate students, and I evidently don’t have the exquisitely tuned sex detector that pre-’68 readers might have developed. This became especially clear in a seminar on Henry James’ The Golden Bowl, when one of my professors at the University of Arizona began to point out the many euphemisms and double entendres left by James, beginning with the name “Assingham” and proceeding from there. I mostly wondered what the big fuss was about, given the modesty of the phrases in questions, but I didn’t realize how generational my readings were until I discovered the Delany interview an hour ago.

Delany is right—I don’t have a lot of tolerance of “innuendo and the coyly placed line of white space.” That doesn’t mean I want every novel to be wildly explicit, or that I want pornography to merge with literary fiction, but it does mean that a lot of older books seem coy. Like Effi Briest. Today, when McEwan’s aforementioned novel takes those white spaces and turns them into entire works of their own, it’s hard to accept the white space, or an extraordinarily “discreet and allusive novel” where Virginia Creepers (or pumpkin pie) have “infinite psychological and sexual repercussions”

I didn’t expect to have my malady so accurately and suddenly diagnosed, however, and it wasn’t until I read Delany that I was able to write this post. He makes me want to be a more careful and considerate reader. Or maybe novels do have a sense of technological progression, or something like progress, or even progress itself. James Wood speculates on the subject in his review of Chang-Rae Lee’s The Surrendered:

Does literature progress, like medicine or engineering? Nabokov seems to have thought so, and pointed out that Tolstoy, unlike Homer, was able to describe childbirth in convincing detail. Yet you could argue the opposite view; after all, no novelist strikes the modern reader as more Homeric than Tolstoy. [. . .] Perhaps it is as absurd to talk about progress in literature as it is to talk about progress in electricity—both are natural resources awaiting different forms of activation. The novel is peculiar in this respect, because while anyone painting today exactly like Courbet, or composing music exactly like Brahms, would be accounted a fraud or a forger, much contemporary fiction borrows the codes and conventions—the basic narrative grammar—of Flaubert or Balzac without essential alteration.

If literature progresses technologically, it still doesn’t do so in quite the same way as technology: no one would use a camera from 1925 unless they were a masochist, had a historical fetish, or were trying to achieve some very peculiar artistic effect. The rest of us use digital cameras manufactured in the last five years, or phones, given the obvious advantages of convenience. But many writers from 1925 still feel quite modern—Fitzgerald, most obviously, but many others too. Yet I don’t find that much 19th Century fiction really moves me (exceptions: Moby-Dick, The Scarlet Letter). Contemporary writers have a greater and perhaps infinite rein to express what they need to express, and by contrast older writers do seem coy, even if this is an unfair judgment on my part—or the kind of judgment that might be tempered by age. The more I think about the idea, the more I see how others have considered it. For example, this review of William Deresiewicz’s A Jane Austen Education is bizarre because it’s like reading about myself, right down to the love for Madame Bovary:

In 1990, William Deresiewicz was on his way to gaining a Ph.D. in English literature at Columbia University. Describing that time in the opening pages of his sharp, endearingly self-effacing new book, “A Jane Austen Education,” Deresiewicz explains that he faced one crucial obstacle. He loathed not just Jane Austen but the entire gang of 19th-century British novelists: Hardy, Dickens, Eliot . . . the lot.

At 26, Deresiewicz wasn’t experiencing the hatred born of surfeit that Mark Twain described when he told a friend, “Every time I read ‘Pride and Prejudice’ I want to dig her up and hit her over the skull with her own shinbone.” What Deresiewicz (who has considerable fun at the expense of his pompous younger self) was going through was the rebel phase in which Dostoyevsky rules Planet Gloom, that stage during which the best available image of marriage is a prison gate.

Sardonic students do not, as Deresiewicz points out, make suitable shrine-­tenders for a female novelist whose books, while short on wedding scenes, never skimp on proposals. Emma Bovary fulfilled all the young scholar’s expectations of literary culture at its finest; Emma Woodhouse left him cold. “Her life,” he lamented, “was impossibly narrow.” Her story, such as it was, “seemed to consist of nothing more than a lot of chitchat among a bunch of commonplace characters in a country village.” Hypochondriacal Mr. Woodhouse, garrulous Miss Bates — weren’t these just the sort of bores Deresiewicz had spent his college years struggling to avoid? Maybe, he describes himself conceding, the sole redeeming feature of smug Miss Woodhouse was that she seemed to share his distaste for the dull society of Highbury.

I’m 27. Maybe I’ll have considerable fun at the expense of my pompous younger self one day.

I bought A Jane Austen Education, which shouldn’t be surprising given my feelings about Deresiewicz. Maybe he will teach me to read Austen more kindly, more attentively (Wood has succeeded at least somewhat in that respect: his discussion of free indirect speech in How Fiction Works finally gave me the tools to figure out why people like Austen). I’m still not sure that it will bring Effi Briest to life, and even if it does, it might be more like reanimating a corpse (which, as genre fiction teaches us, is replete with dangers) than interacting with a live person.