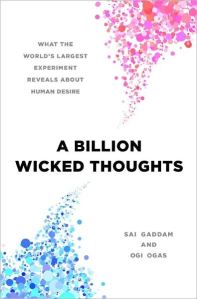 A Billion Wicked Thoughts is good but not great; it covers a lot of much-discussed studies from an angle that, although novel, isn’t quite novel enough. The book is like Why Women Have Sex: both are written by pairs of popularizing intellectuals who probably want to earn more money and affect the social conversation more than they could through writing purely academic work. Anyone really interested in issues around sexuality and evolution is better served by The Evolutionary Biology of Human Female Sexuality, which is insanely detailed and concomitantly worth reading.

But how do we know about the proportions of searchers to non-searchers? This may be an example of the old joke about the “Streetlight Effect:

A policeman sees a drunk man searching for something under a streetlight and asks what the drunk has lost. He says he lost his keys and they both look under the streetlight together. After a few minutes the policeman asks if he is sure he lost them here, and the drunk replies, no, that he lost them in the park. The policeman asks why he is searching here, and the drunk replies, “this is where the light is.

Internet searches are where the light is right now.

Still, the project is interesting, and, in the absence of other data, it makes some sense to use what’s available. Ogas and Gaddam structure the book as a series of chapters that use Internet porn search classifications as headers, note some of those searches, and explain what those searches might mean using research that draws from evolutionary biology, evolutionary psychology, sexology, and similar fields. It’s a readable introduction, but it’s also part of a torrent of pop sex books over the last decade, which you can find through Amazon’s “if you bought this, you’ll also like this. . .” feature. If you’ve read enough of those books, you probably don’t need this one. Read this Salon Q&A instead.

The prose in A Billion Wicked Thoughts is competent—and, unlike Sex at Dawn‘s whacky metaphors and comparisons that strive for style and instead hit silliness, it rarely strays into the ludicrous. Although the purpose of nonfiction is to convey information, the best nonfiction goes beyond that stage to become art (Umberto Eco makes this as a subsidiary point in Confessions of a Young Novelist). A few jokes might even be intentional—I particularly like “On the web, group sex porn has exploded into a variety of sub-genres” (emphasis added)—but A Billion Wicked Thoughts doesn’t quite get there, although there’s nothing wrong with it.

Having little wrong isn’t enough to be right, and they still use coinages like “The Miss Marple Detective Agency” to describe a large body of research demonstrating that women’s physical reactions to sexual stimuli often differ markedly from their psychological reactions to sexual stimuli. You can get a lot of the material in this chapter from the New York Times article “Women Who Want to Want,” starring psychologist Lori Brotto instead of psychologist Meredith Chivers instead of psychologist Lori Brotto.

The upshot shot of the chapter is that many women appear to physically respond to sexual stimuli even when their conscious minds aren’t responsive or even find it disturbing—and those same women are frequently unaware of the phenomenon. Ogas and Gaddamn analogize the situation to the mind-body problem in philosophy (which also happens to be the name of an excellent novel by Rebecca Goldstein). The upshot: “women need to be psychologically aroused.” This appears to be true, but although the research points in that direction, it isn’t perfect; we have effects, but the causes remain uncertain.

In modern romances, the heroine often has a high-powered, high-paying job of her own. Romances feature women who are corporate executives, politicians, and financiers. Since such heroines no longer require a man to provide for their needs, has this cultural transformation led to more romance heroes with limited resources?

Not at all. If a heroine is rich, then the hero is even more rich.

They cite Janice Radway’s Reading the Romance, which studies the genre from a politically inflected but still fascinating perspective. They cite a lot in general, and their notes / bibliography is close to 100 pages. I always admire a book with a very, very big bibliography. In this respect, A Billion Wicked Thoughts satisfies.