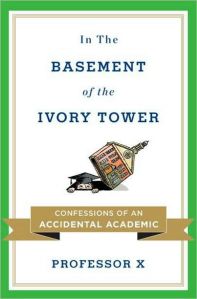 In the Basement of the Ivory Tower is fun, filled with anecdotes, and describes many of the feelings I’ve had in the higher education sausage mill, but you’re better off reading the eponymous Atlantic article from which it sprang. You’ll get 80% of the content with 20% of the time. Still, I especially like this bit from the book because nearly the same thing happened to me four weeks ago:

On the first night, I ask a few questions. How many of you took this class because of an abiding love of literature? No hands go up, ever—they are honest, I will give them that. How many of you are taking this class only because you have to? Now all hands shoot up, to the accompaniment of some self-conscious laughter.

I taught a technical writing course to a room full of public health, nutritional science, and engineering majors and asked how many were in the class because they want to learn more about the great and mysterious power of the English language. No hands. How many were taking it because they had to? All the hands. More of my students could write coherent sentences than Professor X’s students, probably because they’re juniors and seniors who’ve been through a fair number of classes, but “more” is not the same as “all.” Few of them cared. I want to imagine that I imparted real skills through longer and more difficult writing assignments than most of them had faced, but I’m not sure I did. It’s not easy to interest people in a topic when they lack intrinsic interest and don’t see it as valuable to their careers.

Professor X is a good writer (note too that his name is a pseudonym, and he isn’t, to my knowledge, claiming to the leader of the X-Men); he says, for instance, that his students “lack rudimentary study skills; in some cases, they are not even functionally literate. Many of them are so dispossessed of context that every bit of new information simply raises more questions.” Notice that phrase, “dispossessed of context,” which I’ve never thought of in that way before, and yet it fits: the Oxford American Dictionary says that dispossessed means to “deprive (someone) of something that they own, typically land or property,” and one gets the sense that educational system have failed Professor X’s students as much as they have failed the systems (note that there is plenty of blame to go around, and I don’t wish to sling it in this post). There are many moments like this, when unexpected artistry arrives.

This sense of the unexpected extends to Professor X’s grasp of the larger institutional and societal forces at work; he notes that college is supposed to be for everyone even when we’re supposed to have high standards. These two ideals seldom leave unbloodied when they meet in the real world. But he doesn’t have a lot of answers to problems, which is okay because a) large, complex problems often don’t have answers and b) he’s trying to tell his own story, not write a polemic. If you know someone of questionable literacy attempting to go to college and frustrated by the experience, you should recommend this book to them. They probably won’t read it, but if they did, they’d know more. I get the sense that Professor X is working more at the individual than societal level. That might also be what makes his book fun.

Some of the responses to his Atlantic article are bizarre, written by people who seem to have no idea what’s happening on the ground. Some of the later material drags. I like the book but would only recommend it to specialists; I read it because I’m working on my own academic work related to university novels. If it weren’t for that, I don’t think I would’ve gotten enough from it, beyond the Atlantic article, to justify reading.