The Ends of the World is titled well and is also fascinating—one of the best books I’ve read recently. It tells five (or arguably six) linked stories about mass extinctions; like most people I’m aware of the extinction of the dinosaurs, but I hadn’t realized that in many respects that extinction is actually less interesting than the other four. The dinosaurs steal the show, yet the other extinctions are at least as important—which is part of what makes The Ends of the World valuable. The 500-million-year history of complex life on earth is something most of us, including me, don’t know much about. 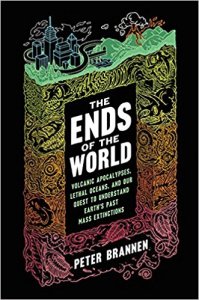 We should. For reasons that become apparent as the book moves forward, we may be repeating many histories of mass extinctions. Brannen traces how. Each chapter is set up like a detective story: People figure out that a mass extinction occurred, and paleontologists and geologists have to work backward from crime to culprit, examining various hypotheses along the way. The structure is effective but also difficult to excerpt.

But the preceding sentences also don’t give a flavor for the writing, which is excellent, and it matches the information. For example, the worst extinction of all time isn’t the End-Cretaceous mass extinction, when the dinosaurs died—it’s the End-Permian mass extinction, when nearly all plant and animal life on earth died. Spoiler alert: in the End-Permian event, massive volcanic activity in what we now call Siberia ejected huge amounts of carbon, methane, and other gasses into the atmosphere. But, in addition to that, lava ran into something else:

The Siberian Traps intruded through, and cooked, huge stores of coal, oil, and gas that had built up over hundreds of millions of years during the Paleozoic. The magma had no economic motive, but the effect was broadly familiar: it burned through huge reserves of fossil fuel in a few thousand years as surely as fossil fuels ignited in pistons and in power plants.

Today humans emit a staggering 40 gigatons of carbon dioxide a year, perhaps the fastest rate of any period in the last 300 million years of earth history—a period that, you’ll note, includes the End-Permian mass extinction. Burning through every last oily drop and anthracite chunk of fossil fuel on earth would release roughly 5,000 gigatons of carbon into the atmosphere. If we do, the planet will become unrecognizable.

If there is slight good news, it’s that the End-Permian mass extinction event range from 10,000 gigatons of carbon to 48,000 gigatons. We’re unlikely to hit figures that catastrophic, but it’s dispiriting enough to think that, for the last several decades, we’ve had the technologies we need to dramatically reduce the amount of carbon released into the atmosphere and we’ve simply chosen not to use them. I’m young enough that I may be trying to explain the psychology and politics behind that decision to grand children in fifty years,

Still, we’re living through an extinction right now, but one that goes back ten of thousands of years. Brannen writes:

even Africa lost 21 percent of its megafauna, with larger animals getting hit the hardest.

British geologist Anthony Hallam (with a somewhat unseemly triumphalism) cites this record of precolonial ecological ruin to ‘dispel once and for all the romantic idea of the superior ecological wisdom of non-western and pre-colonial societies. The notion of the noble savage living in harmony with Nature should be dispatched to the realm of mythology were it belongs. Human beings have never lived in harmony with nature.’

Oddly, for a book about deep time and long time, the paper quality of the physical object is shitty. One would think that publisher (and author, although I don’t think most writers get much of a say on this) would want to produce a physical book that will last longer than the decade or two that most modern books are made to endure. The lousy paper stock implies, “We don’t really give a damn about the final product we produce.” Which is one of the points of the book: Most of us humans don’t.

And we don’t connect our own actions to global consequences. Towards the end of the book Brannen writes, “avoiding [seven to twelve degrees of average, planet-wide warming] will require the goodwill of energy companies to leave 80 percent of their profitable reserves in the ground, and the creation of staggeringly large new sources of carbon-free energy.” But he’s mixing up supply (from the energy companies) and demand (from consumers) here. Energy companies only dig up all those fossil fuels because people want to burn them. If people stop wanting to burn them through some combination of conservation and alternative technologies, energy companies will have no reason to dig.

I’m part of the problem. Back when I had a car, I could’ve bought a Prius, but for some reason I wasn’t thinking closely about energy efficiency at the time and got a Civic. The better car probably only would’ve saved a couple thousand gallons of gas, but multiplied across many people that matters. A friend just moved to L.A., did a similar calculation (or no calculation) and bought some kind of Subaru that probably cost more than, say, a Chevy Volt. Both of us are probably better informed about many planetary challenges than the average person and both of us are sending a signal to those dastardly energy companies to dig up more fossil fuels (and thus contribute to global warming).