Excellent Sheep is great though polemical—snide remarks about tech companies are neither true nor useful—and one gets a sense of its contents from “Solitude and Leadership: If you want others to follow, learn to be alone with your thoughts,” which went viral for the best of reasons (as opposed to the worst, which is more common). “Eros in the Classroom” is also good, though curiously erotically attenuated, and could be read profitably in tandem with Laura Kipnis’s “Sexual Paranoia Strikes Academe.” The two point to the need for satirization of contemporary academic mores, but that satirization is already so thorough that its failure to make much of a dent inside academia is obvious. 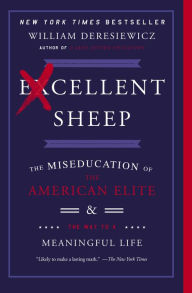 But Excellent Sheep is comprehensive, despite its overreach. But major orators know that if they have the audience the audience will forgive much, as such is the case here. The book is situated as one that fills a need and one that speaks to the author’s earlier self:

This book, in many ways, is a letter to my twenty-year-old self. It talks about the kinds of things I wish someone had encouraged me to think about when I was going to college—such as what the point of college might be in the first place.

I was like so many kids today (and so many kids back then.) I went off to college like a sleepwalker, like a zombie. College was a blank. College was the ‘next thing.’ [. . .] Up ahead were vaguely understood objectives: status, wealth, getting to the top—in a word, ‘success.’

I was perhaps slightly less blank but barely so. That being said, I often try to talk to current college students about what college is about and usually get resistance. So it may be that Deresiewicz’s twenty-year-old self wouldn’t listen to older Deresiewicz anyway. And, like almost any book of this sort, Excellent Sheep probably won’t be read by many of the students who could most benefit from reading it. Many who might be handed it might resist it. Slightly analogously, I’m struck by Emily Nussbaum’s description of Mary Gaitskill’s Bad Behavior: “In 1988, when her short-story collection Bad Behavior came out, it became a dorm-room bible for women I knew: Finally, here was a fiction writer unafraid to walk straight through the feminist battlefields of that very strange period.” I’ve assigned it before and it’s not been treated as a Bible; some students cottoned to it but some strongly resisted, though I also don’t think of it as dealing with “the feminist battlefields” of anything: I think of the stories as being about individuals, not dreary ideologies or ideological think-pieces.

Deresiewicz has a keen grasp of what’s happening in contemporary academia and, often, life itself. He writes of a “system,” or “a set of tightly interlocking parts,” including “private and affluent public high schools; the ever-growing industry of tutors and consultants, test-prep courses and enrichment programs; the admissions process itself; [. . .] the brand-name graduate schools and employment opportunities that come after the BA [. . .]” and of course much more. But this paragraph is the most interesting:

What that system does to kds and how they can escape from it, what it does to our society and how we can dismantle it—those are the subjects of this book. I was teaching a class at Yale on the literature of friendship. One day we got around to talking about the importance of being alone. The ability to engage in introspection, I suggested, is the essential precondition for living the life of the mind, and the essential precondition for introspection is solitude. My students took this in for a second—introspection, solitude, the life of the mind, things they probably had not been asked to think about before—then one of them said, with a dawning sense of self-awareness, “So are you just saying that we’re all just, like really excellent sheep?”

He goes on: “The system manufactures students who are smart and talented and driven, yes, but also anxious, timid, and lost, with little intellectual curiosity and a stunted sense of purpose.” I’ve noticed those things. They are of course not pervasive. But I also find them impossible to miss.

Excellent Sheep is a truer work of philosophy than 99% of the stuff published under the banner of “philosophy.”

Already I’ve chewed through a thousand words and two long blockquotes and have gotten to page three of Excellent Sheep. That should speak to the book’s quality. To attend to its every argument would be to almost write another book. As I said before, don’t trust everything. But do read it. It is also interesting to me that this article about Peter Thiel describes his mistrust of the education system, which partially evolved from his unhappiness with a track-based life and system. Yet this system persists for reasons, some of which Megan McArdle articulates in “What Really Scares Helicopter Parents.” The system has been in construction for decades. Startups are one route around them. Self-publishing is another. One can no doubt imagine more.

Many people are bad at being and bad at purpose. Including, possibly, me. Excellent Sheep challenges them, which is to say, us.