September 23, 2015 By Jake Seliger in Links Leave a comment

* A review of studies of standing desks; as you know I use a GeekDesk and am standing as I type this.

* An excellent piece on Elmore Leonard, one of my favorite writers, ever: Start with Get Shorty and Out of Sight, in that order. Like many writers and especially prolific writers his work is uneven, but as always the best more than excuses the worst. Few of us hit the high notes even once.

* “‘Quirkyalone’ Is Still Alone:” note this: “Lately I’ve been having a lot of conversations with friends who find themselves still single in their 30s and 40s and are starting to worry that it’s not [. . . ] New York City’s cruelly Darwinian dating scene or bad luck. It’s just them.” NYC isn’t “cruelly Darwinian:” it has the shape it does because of sex ratios and preferences. The article could be read profitably in tandem with my post on Date-onomics.

* Utter absurdity in the UN: “Fury after Saudi Arabia ‘chosen to head key UN human rights panel.’” This in a country where at least 50% of the population is systematically oppressed in a shocking, breathtaking way.

* The Plot Twist: E-Book Sales Slip, and Print Is Far From Dead.

As previously noted, Mate: Become the Man Women Want is out and it’s good.* As the book says in the introduction, “Your culture has failed you and the women you’re trying to meet.” The book is part of the remedy. When I read the draft a couple months ago I told Tucker, “I wish I could teleport a copy of Mate back in time and give it to my 13-year-old self, and then instruct him to read it once a year for the next decade.” That’s still true. If you know any teenage or early 20s guys who are likely straight, give them a copy of this book. It is not going to be useful for everyone and indeed I expect some of you to strongly dislike it. People like how-to in many fields but often not this one. 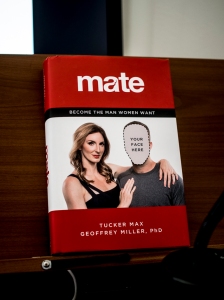 The book emphasizes empathy: “If you always try to understand the woman’s perspective—what they want, why they want it, and how to ethically give it to them—then you will find it much easier to become attractive to them, and you’ll be much more successful with your mating efforts.” There are no shortcuts. For a while I’ve been describing the empathy gap, because I increasingly think that the average man doesn’t much understand or try to understand the average woman—and vice-versa. That’s why books like Mate, or Self-Made Man: One Woman’s Year Disguised as a Man, are valuable: they work to close the empathy gap.

Parts of the book will be obvious to older guys who have their lives together—that showering and grooming are important will not be news, but most of us can also probably remember the shambling smelly kids in school. Other parts counteract some of the more dubious parts of our culture, like the claim that women are attracted most by money and that all women are “gold diggers.” For most women most of the time other things matter most, like how “individual women just your fuckability by your social network. So you had better have proof—social proof—that it exists.” Most people, men and women, who want a relationship reasonably want to know the person they’re having a relationship with, and that means knowing friends and family—and knowing they exist. Many of us have had the experience of sleeping with someone who keeps us totally separate from the rest of their lives. Sometimes that can be good—we don’t “count”—but for actual relationships it’s not.

There are still hilarious metaphors and comparisons, like “[A lot of guys think they need to have a ton of money,] then the women will just magically appear, like monarch butterflies to milkweed, flies to honey, rappers to Scarface posters.” But there are fewer of them: The book is entertaining but it leans informational. I at least felt rueful for my teenage and college self when I read some sections. Perhaps my favorite moment occurs two-thirds through the book, when Max and Miller are noting some of the artistic skills that women like, like music, storytelling, and, saliently for this quote, drawing:

The key thing here is to cultivate actual skill rather than indulge in modernist expressionism or abstract art. The poet John Ciardi pointed out, “Modern art is what happens when painters stop looking at women and persuade themselves they have a better idea.”

I’ve never read as concise and accurate description of why so much modern art is so bogus.

The bibliography is useful.

* As also previously noted, I now know Tucker well enough to not be an unbiased critic.