Nick Hornby spoke at the Union Square Barnes and Noble on Wednesday, in support of his novel Funny Girl, parts of which he read and supported the claim to comedy in the title. Comedic writers may in general read more successfully than other sorts of writers, or perhaps Hornby is unusually engaging. His talk and the book suggested that perhaps obsession makes us interesting and shows who we are, though Sophie, the protagonist of the novel, has nothing in its beginning save what she wants to become. 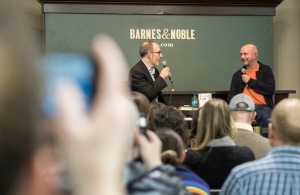 Funny Girl is well-observed (“He said that the bevy of beauties in front of him—and he was just the sort of man who’d use the expression ‘bevy of beauties’—made him even prouder of the town than he already was”) and a keen sense of absurdity shadows the opening of the novel (which is all I can comment on so far).

At one point Hornby said that “Acquiring a family of choice is the dream, isn’t it?” but the challenge of a family of choice may be that it is easier to choose to leave such a family than a genetically intertwined family. Some of his talk also implicitly asked why collaboration is simultaneously so hard yet so essential; the book explores that question on an interpersonal level but per Peter Watts it may also apply on a cellular level.

The audience questions were as usual mumbly democracy in action, but Hornby, like T. C. Boyle, seemed to like or fake liking them. Many, many of them took photos with their cellphones held up high, as depicted above; many saw Hornby through their phones as much as their eyes.

On a separate note, Hornby’s novel High Fidelity holds up well and among other things implies that lists are a way of eliding criticism, real knowledge, and rhetoric. This description however makes it sound boring when it is not.

Here is a Slate interview between Hornby and Dan Kois.