The State of Affairs is another book that, like Mating in Captivity, touches topics of wide interest that almost no one wants to address directly. Perel says, “Few events so encompass the breadth of human drama” as the one she’s writing about, and, while that may be overstated, she’s not wrong in her trust. She also says, “my goal is to introduce a more productive conversation about the topic,” and the “productive” being an interesting choice here: What is being produced? What efficiency is being brought to the problem or product space? She says too, that she wants to “ultimately strengthen all relationships by making them more honest and resilient.” Do most people want honesty? I used to think so and am now less sure. Many more of us may want to want honesty than truly want honesty. 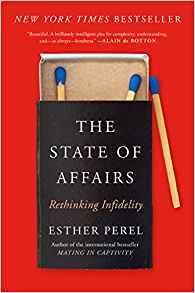 That said, Perel also says, “Because I meet with partners alone as well as together, I have been afforded an unusual window into the experience of the unfaithful partner.” The “unusual window” is the view she affords us, somewhat voyeuristically. We used to have to rely primarily on novels and gossip for the view into the unusual window, but now we have Perel, standing at the side with a laser pointer and a stick, telling us about the flora and fauna inside. She nicely sidesteps what she calls the “for or against?” question and moves into a large number of questions about framing, motivation, and stories. As she says, “Catastrophe has a way of propelling us into the essences of things.” She hits a lot of essences. She also acknowledges what a lot of non-novel-readers might easily forget: “We are walking contradictions.” Some theories of consciousness hold that consciousness arose to mediate contradictory impulses. If so, we’ve been struggling with the results ever since.

Perel is with opinions, though. She’s not a total relativist, describing without opining. She finds that the “best friend” model of romance and modern relationships is often stifling, unworkable, and historically unlikely. Throughout most of history, spouses and lovers didn’t even need to be friends; they needed to produce children, inherit property, continue their culture—that kind of thing. Today, she says, many of us make one person play every single role in our lives, or try to—usually without total success. I think she’d agree with many of the ideas in Lost Connections. We’re collectively suffering from loneliness and degraded social connections, and when we try to get our spouse, partner, or lover to make up for those losses, we’re setting ourselves up for disappointment. She says, “Every day in my office I meet consumers of the modern ideology of marriage. They bought the product, got it home, and found that it was missing a few pieces.” “Consumers:” that’s pretty close to the questions about “productivity” she mentions in the introduction, and that I mention in the first paragraph. I read in Nassim Taleb an interesting idea (it may not be original to him) that went something like this: Communism for the immediate family, socialism for the extended family, market economies for the larger community, and outright capitalism for the polity at large. I think his point is that different kinds of structures apply at different scales. Perel’s point may be that a consumer-first, hedonism-first, and satisfy-me mindset may not apply very well to small-scale relationships. “Not apply very well” is probably an understatement: those mindsets may poison small-scale relationships. But we never think about them. Why not? Why does almost no one except Perel talk about this?

If there’s something I want more of from the book, it’s evolutionary psychology and biology. They make an appearance—”Evolutionary psychologists recognize the universality of jealousy in all societies. They post that it must be an innate feeling, genetically programmed, ‘an exquisitely tailored adaptive mechanism that served the interests of our ancestors well and likely continues to serve our interests today.'”

This is a good New Yorker discussion of the book. And here is another piece, in Tablet. If you want to go back further, consider Tony Tanner’s Adultery in the Novel: Contract and Transgression, a book I admire—but it came out in 1979 and discusses works from considerably earlier, so it, like so much writing produced by humanists, is missing evolutionary biology.

We still have no idea what’s really going on, and maybe we never will, because technology is moving faster than human norms, human social structures, and human legal structures. That mismatch may be the driving force behind a lot of weird social stuff we don’t really understand. The State of Affairs pulls us out of the day-to-day and pushes us towards what lies beneath. Most of us don’t want to go there and don’t want to understand, but if you do want to understand read it. There are lots of stories and not a lot of data; if that’s going to bother you, there are lots of nice other choices in adjacent genres that will feed you what appears to be good data (though turning data into truth is always tricky at best).

Also, if you ever get a chance to hear Perel live, do it. I did she’s one of these magnetic public speakers who’s also quick-witted (much more so than the audience members asking her questions that just standard political talking points—if you do this, you may be unhappy with the result).