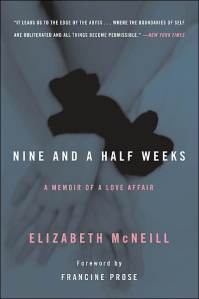 Most novels (and memoirs) leave you with a sense of distance, a sense of being at a comfortable remove. Nine and a Half Weeks doesn’t: it’s too graphic, too immediate, too flat. One sees this effect in the first sentences, without any preamble as to who these people are and how they came to be: “The first time we were in bed together he held my hands pinned down above my head. I liked it. I liked him. He was moody in a way that struck me as romantic; he was funny, bright, interesting to talk to; and he gave me pleasure.” One senses quickening thoughts and pulses in those short sentences, and even in the long one, where semicolons could be periods, and the last descriptor—”he gave me pleasure”—is the really important one. You don’t get the very ironic tone of a book like Alain de Botton’s On Love, letting us see that love is irrational but really understandably so. Alain, the narrator of On Love is basically a needy, endearing, neurotic weakling; his self-consciousness contrasts so much with the man in Nine and a Half Weeks that they’re practically different species.

There are clever phrases in the memoir, as when the narrator says of her lover, “His face turns attractive when he talks;” I like the strange word choice, as if the head is physically turning, or as if he has two, or multiple, faces. A few moments are archaic—the man describes a friend or rival coming over as “This dope” (emphasis in original), which hasn’t been currently slang in decades and stands out in a book that otherwise stands out for not being part of any particular time. The prose holds up, and the narrator has an eye for tedious rituals, as when she tells of a “statistical tale,” where the contrast of statistics and narrative stands out:

In the middle of the statistical tale he’s requested from me—brothers and sisters and parents and grandparents, hometown, schools, jobs—I stop and close my eyes . . . please, I think, inarticulate even in my own mind, unable to turn to him and make the first move, please . . .

There’s a pervasive fear of dullness running through the memoir. The narrator notes that she and her lover looked like “An attractive, well-educated couple in New York City, average, middle-class, civilized.” That contrasts with what came before and will come after. Or does it? The memoir teases us by making us wonder if the the narrator isn’t so unusual as public discourse would make her out to be. I think the story’s flatness, the unwillingness to engage in direct commentary on what’s happening, points us in this direction, as when the narrator says, “I am standing, nearly on tiptoes, across the room from him, my arms raised above my head. My hands are tied to the hook on the wall on which his one large painting hangs during the day.” She’s hung like a painting and enjoys it. There is no further morality or analysis. Sixty Minutes plays in the background, a reminder of the middle America the narrator feels like she’s leaving behind even when she imagines it as a foil to her own actions.

Images repeat through the memoir. Scarves reappear. The words “like” and “love” are reconfigured like body parts. One senses Nabokovian echoes in the prose that one distantly hears on the first read but can’t make out. The narrator also feels her internal sense of self discombobulating, like a washing machine that shakes itself apart from within. She knows this is happening and imagines the reactions of otherwise course, until she writes of her experience.

We don’t know what the narrator wants beyond the obvious: sexual satisfaction. That she might only want the obvious might be the most frightening thing of all. What if everything else she has—a job, presumed communal respect, literary and political opinions—don’t matter very much? What if your real self isn’t those frontal cortex developments, but something deeper, more primal? I find posing the questions unsettling. The answers implied by Nine and a Half Weeks are more so. The patina of everyday experience conceals so much, especially in the realm of inchoate desire that social life is designed to channel. What happens when the channeling breaks? What happens when we want it to break? I’m reminded of Donna Tartt’s The Secret History, which also features the discarding of the mind in pursuit of a mental state or feeling very unlike the one most of us presumably inhabit most of the time—the mental state worried about how much money we have, what other people think about us, whether we’ll get the job / life partner / degree / accommodates of our dreams.

The narrator likes the man’s dominance above all other traits, which derive from that dominance. He says of a friend or rival, “he’s got no guts whatsoever.” Note what she likes in the contrast he offers by comparison. He shows mastery by reading Gide in French and Kafka in German, both implying continental expertise and sexuality. Some moments are obvious, as when the narrator reads with “his thick pen solid and comfortable in my hand.” One doesn’t need to be Freud to imagine that the pen is not just a pen. In the same scene, the narrator says, “I write the letter (‘. . . met this man a few days ago, nice start, very different from Gerry, who’s more than happy with Harriett these day, you remember her . . .’)” (sic). The dig at her ex-boyfriend is subtle but present: he isn’t dominant, won’t tie her up, and presumably has settled with a lesser woman.

He demonstrates great knowledge too: “[. . .] whatever else he may do [in] it, this man clearly does read his original-language books in bed; why would anyone want to miss out on one of the most satisfying pleasures available? All he’d need is a better bulb, a few more pillows, and a reading lamp. . . .” The room sounds sad and denuded, but it doesn’t matter much, even if the narrator is right about beds, which are good for more than just sleeping and that other thing. He offers commands, as when the narrator says:

He guides my hands between my legs and says, ‘I’d like to watch you make yourself come.’

He is sitting idly, comfortably, one leg crossed over the other, the creases sharp in the freshly cleaned suit. I do not try to move my hands. He waits. ‘You don’t understand.’ My voice cracks. ‘I never . . .’ He is silent. ‘I’ve never done that in front of anybody. It embarrasses me.’ “

She does, of course. That it embarrasses her is part of the point. What embarrasses her in the moment becomes the fodder for memoir, even under a pseudonym, long after. She likes giving power to him, which she does by letting him watch her masturbate. She also does by repeating how much she loves him, but I don’t think he ever says it back. It’s like he doesn’t need to, and by withholding the confirmation of his love he creates a neurotic fear in her. Only at one moment does he crack, when “All at once he is a decade my junior, a very young man asking me to have a drink with him, expecting to be refused.” But that doesn’t last long. Little does in this memoir, including their relationship, whose duration is given away by the title. But the narrator learns a lot in a short period. She says, “If you’ve never screamed, out of control, you can’t imagine how it feels. Now I know how it feels, it’s like coming.” She never goes the Biblical or mythological root and thinks there are things we shouldn’t know. For her, all knowledge is knowledge.

You can see that McNeill’s memoir doesn’t sit well with current ideals of equality and mutual respect in all fields. As Laura Kipnis says in “Off Limits: Should students be allowed to hook up with professors?” for Slate.com, “Feminism has taught us to recognize the power dynamics in these kinds of relationships, and this has evolved into a dominant paradigm, the new propriety.” Feminism has taught us to recognize power dynamics, but it should also teach us to recognize points of view. The narrator gets this; she thinks the man’s room is “too plain to be called plain. It’s austere, if you want to be charitable, or chic, if you want to be snide, or boring, if you want to be honest. It is not, in any event, a room you’d call cozy” {McNeill “Love”@9}. So the narrator is aware of angles, points of view, possibilities. I’ve been told I use “or” a lot in my own writing. It’s a useful word for people who perceive many ways of describing things, and here it betrays an openness to experience that the memoir exploits. She has a strong theory of mind that weakens as she awakens to herself.

I should point out that I call the narrator “the narrator” as opposed to “McNeill” or something more conventional because she feels like a fictional person more than a real person (which is strange, given how many fictional characters seem real, but that’s a topic for another time). Elizabeth McNeill is itself a pseudonym. We don’t know who the real author is. The man is never given a name—he’s only given traits, like his penchant for Brooks Brothers and sadomasochism (sometimes, especially when it comes to belts, simultaneously). So I don’t entirely know what to call them, or what to call their madness, if it is indeed madness. Can we find pleasure in madness? The narrator’s point is that many of these normally distinct categories eventually blur. I think that’s one of Tartt’s points in The Secret History too. There is more to be written about the book—its strange tenses, leaping from past to present to future, to what extent we should indulge in or avoid attempting to apply universal lessons—but this gives flavor of it and why its merits still show.