This passage is representative of Slutever: Dispatches from a Sexually Autonomous Woman in a Post-Shame World:

My first attempt at nonmonogamy was while I was living in London, soon after my relationship with Sam ended. I was twenty-three, and fell really hard for this beardy Scottish musician. He lived in Glasgow but came to London a couple times a month with his band. I met him while high on ecstasy at a squat rave, obviously. 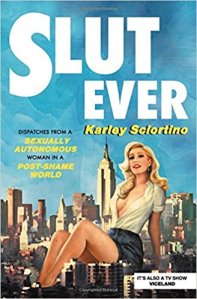 “Obviously;” where else does one meet a beardy Scottish musician? I say it’s representative because of the odd, jangly alliteration, “was while I was,” which sounds not quite right, especially due to the repeat of the word “was;” the unneeded comma in the second sentence; and obviously that “obviously” at the end. But I still laughed, and laughter is probably the best test for a book like this. It’s easy to condemn the frequent use of “honestly,” “whatever,” and “obviously,” but try not to do that. Yes, you will read “shout out to Hester Prynne, OG high priestess of slut-shaming.” The jokes redeem the book and the language is part of the joke. People in coffee shops looked at me not just because of the book’s eye-catching cover but because I was laughing.

You will find paragraphs with incongruous markers stacked up against each other:

Who hasn’t rented a shaman from Mexico for the afternoon? But this kind of repeated incongruity is what makes the memoir-manifesto novel—more novel than many superficially high-status novels. And despite the admiration for hallucinogens and their uses, Sciortino also makes fun of Burning Man, which is, I hear, ground zero for doing such things, or doing such things in large groups of collaborators.

Sciortino writes, “Like, my goal isn’t to be good or normal or accepted. My goal is to be free. (And maybe also to troll society a bit in the process, for good measure).” Yet I wonder what freedom is; I used to think I knew and now I’m not so sure.

Slutever is not for all of you who may be reading this, but it is for some of you, and probably for more of you than you’d admit in a public setting.