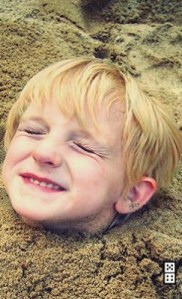 Anything You Want is hard not to love: it’s a collection of lessons bound up in stories that hit the place where life, business, dreams, and meaning intersect, in a way that transcends my unfortunate description (Sivers on Sivers: “This is most of what I learned in ten years, compacted into something you can read in an hour”). I learned more from this hour than from 20 hours spent on numerous dense, tedious books. Anything You Want inspires me to use abstract ideas like “life” in my description because that’s what the book is about, but the reading experience itself feels so concrete. A woman I know, for example, was busy castigating all the guys she met through online dating, and I sent her this:

She was half-hearted about it. She wanted a magic perfect man to sweep her off her feet through divine serendipity.

We were at her computer, when I asked her how it’s going. She logged into her account and showed me her inbox. Eight new messages from men, each one well-written, saying what they liked about her profile, how they have a mutual interest in hiking, or also speak German, asking her if she’s also been to Berlin, or have hiked in New Zealand.

I felt for those guys. Each one pouring out his heart, projecting his hopes onto Valerie, hoping she’ll reply with equal enthusiasm, hoping she might be the one that will finally see and appreciate him.

She said, “Ugh. Losers. I get like ten of these a day,” and clicked [delete] on all of them, without replying.

Valerie fails to have empathy. Sivers understands empathy, which is part of what made and, I assume, makes him effective in business. He goes on, “It’s too overwhelming to remember that at the end of every computer is a real person, a lot like you, whose birthday was last week, who has three best friends but nobody to spoon at night, and is personally affected by what you say” even when he doesn’t use the word. It is “too overwhelming,” but it shouldn’t be. Someone is on the other end of everything we do online and over the phone, but why don’t we remember? Because we’re not seeing things from their perspective. Sivers is.

If he didn’t, he probably couldn’t’ve run CD Baby, or run it the way he did, which was something closer to an art form than to an MBA stereotype. I wonder: did he read The Management Myth when The Atlantic published it? If so, did he feel a shock of recognition? If not, he should’ve. Anything You Want is better philosophy than 99% of the material published by academic philosophers. In this philosophy bite, Alain de Botton observes how few philosophers have real style, despite being writers, and how many of them mistakenly think bad writing necessary to the practice of philosophy because of a number of historical accidents involving good philosophy encased in bad writing (here, I’m thinking specifically of Hegel and the popularization industry that’s grown up around him to translate him into something comprehensible). Sivers gets that. He gets so much. Sometimes I wonder if the study of philosophy should really be studying how people get one another (or don’t) to believe. Isn’t that so much of what the world is about? Isn’t that what so many people are trying, on some level, even without direction, to do? Why then do so many of us, myself included, fail?

Maybe getting one another is just “overwhelming.”

Most people don’t know why they’re doing what they’re doing. They imitate others, go with the flow, and follow paths without making their own. [. . .] Don’t be on your deathbed someday, having squandered your one chance at life, full of regret because you pursued little distractions instead of big dreams.

That size contrast between “little distractions”—the stuff that everyday life consists of—and “big dreams” is so stark, so simple, so beautiful, like the warning against death that acts as a way of propelling life. Those little distractions proliferate like kipple. I’m in the midst of one right now in the form of grad school exams, and its frustrations drown me, and reading Anything You Want makes me feel better because it’s not really about anything you want: it’s about anything you choose to do and make in the world for others: a far more powerful goal than merely doing things for yourself.

Still, the sentiment about imitating others and squandering “your one chance at life” is somewhat expected: we’ve heard the carpe diem idea group before. Sivers can be weirder, in the best way, and more distinctive: “But ‘revolution’ is a term that people use only when you’re successful. Before that, you’re just a quirky person who does things differently.” He gets distinctions: what he did and why he did it didn’t change much, but perceptions of him change. There are aphorisms too: “If you set up your business like you don’t need the money, people are happier to pay you.” In other words: don’t exude desperation, especially when you are desperate.

It’s impossible to cite a negative, but one thing I find fascinating about Anything You Want—like Paul Graham’s essays and Tyler Cowen’s The Great Stagnation—is the absence of superfluous material. I call it the “word-to-value” or “word-to-idea” ratio. One sometimes finds great slops of books that run to hundreds of pages based around a very limited idea or set of ideas. Even if the core idea within said book is valuable, it’s hard to recommend the whole thing; a book like Rapt falls in this category.

Note that I’m not ranting against long books in either fiction or nonfiction: Cryptonomicon enthralls, and Joel Mokyr’s The Enlightened Economy manages to be illuminating and various over 500 dense pages. Neither his work nor Sivers’ is “right,” per se, since both are well-written, idea-rich, and engaging, but it’s nice to see someone like Sivers, whose experience informs every section and who cuts like I don’t. I’m more loquacious in a way that I like to think is valuable, but that doesn’t mean I don’t appreciate someone whose directness should be a model.

You can, by the way, in effect get Anything You Want as a collection of blog posts; I’m not sure Sivers has added to the book form. But I like the book form better. Sometimes one needs a great drink of water instead of dribbles. Sivers’ essays—”essay” is a bit too substantial, but “post” doesn’t do him justice, either—have those “pops” at the end, when the lesson meshes with the story. He even explains how he learned to write terse: when you’ve got tens or hundreds of thousand of people receiving an e-mail blast, small ambiguities can regenerate hundreds or thousands of e-mails in response. So you better be clear and you better be succinct, because few people are going to read through a 1,000-word missive and confused people will slam you with replies.

I’ve re-read Anything You Want a couple times, and each time reveals new facets. Few books do.