* “Safe from ‘safe spaces:’ On the rare good sense of a college administrator” has an innocuous title but is a magnificent piece. Only the necessity of writing it is distressing.

* How Battery-Powered Rides Could Transform Your Commute.

* The Cheap Ticket Into the ‘Elite’ Class”

* “Why U.S. Infrastructure Costs So Much,” which are “are among the world’s highest.”

* “Employers Struggle to Find Workers Who Can Pass a Drug Test.” Perhaps the solution is overly radical, but employers could judge employees by their work, rather than their recreational hobbies? I’ve never been drug tested on the job.

* “Get Out of Jail, Now Pay Up: Your Fines Are Waiting: Eliminating monetary penalties that accompany conviction may help ex-convicts get on their feet.” Sample: “The story of my research—the story that must be told—is that our 21st century criminal justice system stains people’s lives forever.”

* “The American economy’s big problem: we don’t have enough companies like Tesla.” There are returns to workers and consumers when small companies become large ones; one problem Europe has is that going from startup to huge is very hard. Europe has lots of tiny companies and a bunch of behemoths, but very few that go from the one to the other.

* “Forty Percent of the Buildings in Manhattan Could Not Be Built Today,” which helps explain why NYC, like LA, Seattle, and many other places are so expensive today: It’s illegal to build the housing that people want to live in.

* “Nail-Biting Livestreams of New York City Bike Commutes: Intrepid cyclists are taking to the streets with GoPros to show the uninitiated an all-too-real slice of their experience.” I just bought a GoPro for this purpose! Though I didn’t realize that I’d need to buy a battery and MicroSD card for it too, so I don’t yet have it set up. This is my most recent bike post.

The GoPro is much smaller than I imagined, and the pictures include a small Rhodia notebook for scale. 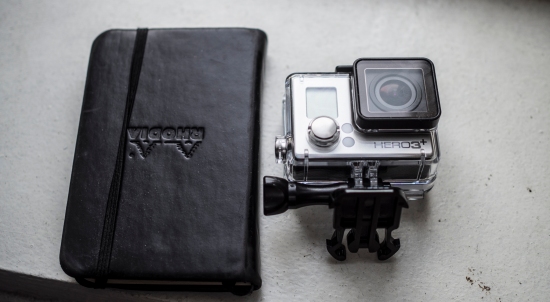 * Divorce, Custody, Child Support, and Alimony in Denmark, which arguably has better outcomes than the U.S.

* Usually I don’t care for graphic novels, but Alan Moore and Melinda Gebbie’s Lost Girls is an exception; this interview with the authors is also excellent and new to me.

* A Cruel and Unusual Record: The United States is abandoning its role as the global champion of human rights. (Endorsed.)

* Robert Nagle: “‘That Fish has been fried’–definition and explanation;” I would add that many disagreements end or should end not with agreement, but when both sides have run out of facts, evidence, or ideas.

* Can Austin stay weird as it grows?

* Worse than Manhattan? Bike expert rattled by ride through Seattle.

* “Why the U.S. is being humiliated by the hunt for Snowden,” emphasis added, as the “why” has been largely neglected.

* Stop Attacking Male Writers for Being Sexist: Protagonists don’t have to be likable to be great.

* Sleep Deficit: The Performance Killer. This should be obvious, and medical residency directors ought to read it.

* “[N]one of my contemporaries seem to be interested in the things that interest me, such as fast, clear, several-stranded narrative, action, character, violence.” Can you guess the context? It’s actually about poetry, but it fits literary fiction too and my feelings about so much lit fic.

* Tea: Not Just for Girls; I find this intriguing, since I am a guy:

My customers are about 60% male, and men make up the majority of attendance at my tea tastings. Why guys? I think guys are fascinated by the history and culture of tea, and view tea as a hobby — seeking out the best of the best, matching tea with tea ware, using ancient steeping methods.

* Charlie Stross: Why I don’t use the iPad for serious writing. But he’d like to. And I’d like to. I don’t own an iPad primarily because it looks like a media consumption device, and while I read and watch a fair bit of “media,” I want to focus more on the production side of things most of the time.

* Jurors Need to Know That They Can Say No; “The First Amendment exists to protect speech like this — honest information that the government prefers citizens not know.”

* This Bike Could Save Your Life: An Infographic On The Massive Benefits Of Bicycling.

* The New Full-Frontal: Has Pubic Hair in America Gone Extinct? To me this reads like old news, like a lot of the reporting “old” people do on “young” people. I wonder when I join the old people reporting instead of the young people, with their shocking, new-fangled ways, being reported on.

* David Henderson’s “Occupy Monterey” talks are fascinating in part because they reveal the basic economic illiteracy of much of his audience. There are three parts, all at the link; some of the comments shouted from people in the audience remind me of things I’ve heard peers and profs say in English departments.

* The No-Brainer Issue of the Year: Let High-Skill Immigrants Stay:

Behind Door #1 are people of extraordinary ability: scientists, artists, educators, business people and athletes. Behind Door #2 stand a random assortment of people. Which door should the United States open?

* Get Ready for Manufacturing’s Big Comeback; “As the cost of doing business in China rises, U.S. manufacturing could be on the verge of a renaissance.”