The book is here and you should read it, although I think most people don’t actually want to know its contents. Most of us, I suspect, prefer to lie to ourselves and each other. Consider some of the evidence Hanson and Simler present:

Why do patients spend so much on medical care? To get healthier: That’s their one and only goal, right?

Maybe not. Consider some of the puzzling data points Robin discovered. To start with, people in developed countries consumer way too much medicine—doctor visits, drugs, diagnostic tests, and so forth—well beyond what’s useful for staying healthy. Large randomized studies, for example, find that people given free healthcare consume a lot more medicine (relative to the unsubsidized control group), yet don’t end up noticeably healthier. 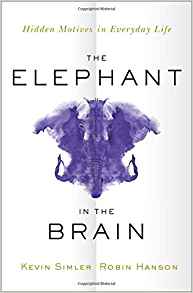 So why doesn’t anyone know about this? I think we don’t want to know. For that reason, I’m not sure this book will be popular. Most people write, and maybe think, based on slogans: we see this all the time, everywhere, online.* I doubt that the fact that people over-consume free healthcare will have any effect at all on most people, but arguing that healthcare is a basic human right will—that activates people’s caring moral foundation. This book is likely to be read by weirdos who may not have much effect on the rest of society.

The first page of chapter four has one of the great footnotes of all time.

Let me pull one section that amuses me; I occasionally make an argument that friends think is harmlessly eccentric at best and outright offensive at worst: TV and movies are better than live theater because their range of possible expression is so much greater. Good video uses a range of scenes, actors, and sounds; it isn’t inhibited by the limitations of the stage. Most people I’ve said this to have said that I miss the point (maybe they’re right) and that live theater is beautiful for its own sake. Usually I’m just looked at like I’m weird (again, the lookers may be right).

Artists routinely sacrifice expressive power and manufacturing precision in order to make something more “impressive” as a fitness display.

One place we find this sacrifice is in the performing arts. For example, by almost any any measure of technical control, film exceeds live theater. Film directors can fuss endlessly over lighting, set design, and camera angles […] And the results are frequently sublime, which is one reason film has become the most popular dramatic and comedic medium of our time. And yet consumers continue to relish live performances, shelling out even for back-row seats at many times the price of a movie ticket. Why? In part, because performing live is a handicap. With such little margin for error, the results are that much more impressive. A similar trade-off arises for musicians (e.g., lip syncing is anathema) and standup comics, and for the improve versus sketch-comedy troupes. A live performance, or even more so an improvised one, won’t be as technically perfect as a prerecorded one, but it succeeds by putting the artists’ talents on full display.

To be fair, too, in the case of music and standup, the artists are often trying out material and experimenting with audience reaction, before turning the final result into a video or similar product. In some cases, like improv, the audience becomes part of the product. We’re trying to be impressive, and the harder it is to be impressive, the more one is impressed.

But consciously saying, “I’m an artist to increase my reproductive fitness” is not impressive and no one says it. Hanson and Simler offer some mechanisms:

We, human beings, are a species that’s not only capable of acting on hidden motives—we’re designed to do it. Our brains are built to act in our self-interest while at the same time trying hard not to appear selfish in front of other people. And in order to throw them off the trail, our brains often keep ‘us,’ our conscious minds, in the dark. The less we know of our own ugly motives, the easier it is to hide them from others.

Self-deception is therefore strategic, a ploy our brains use to look good while behaving badly.

It’s interesting too, in light of their chapter on art, to think about what counts as art. Writing a novel? Yes. Painting a picture? Yes. Writing or designing an operating system? Not much, and not to most people. “Writing an operating system” may have occurred too recently in our evolutionary history to make doing so an attractive sexual display. But if we know we’re making art as a mating display should we then take that knowledge and direct our time and resources into other fields?

It’s a question that should be more seriously considered. And I write this as someone who has written novels and is working on one now.

One short question we might want to ask ourselves in many endeavors is, “Am I doing this to be maximally effective at the thing I am doing, or am I doing this thing to signal some other trait or achieve some other goal?”

Hanson’s previous book is The Age of Em: Work, Love, and Life when Robots Rule the Earth, which is very interesting for the right person—of whom there are not many, including me. It applies economic analysis to a world in which human brains can be emulated can thus intelligence is almost freed from pesky material constraints like birth, senescence, and death. As a book it’s a bit like science fiction without a story. Post-singularity SF often works poorly to baseline humans because humans are bad at conceiving what non-human intelligence or consciousness might be like. The Age of Em is very good at what it is, but it’s notable that almost no one tries to write in its genre.

Here is a review of Elephant in an unexpected venue. Others may be found. I have not found any good rebuttals of it; it may be a book easier to ignore than rebut. I’m going to re-read it. It’s not the kind of book one absorbs the first time.

* “Most people write, and maybe think, based on slogans” may itself be a slogan: I’m not immune!