The Great Good Place is often dated but still interesting, and it’s highly congruent with Lost Connections: Uncovering the Real Causes of Depression; Hari argues that one reason so many of us are anxious and depressed is that we’re spatially disconnected from other humans, and Oldenburg explains how that came to be—and how the physical space we inhabit affects us. Online life is a very poor substitute for in-person life, it seems, and articles like “Teenagers are growing more anxious and depressed” appear routinely. Friends who teach school say kids seem less able to handle their own lives and make independent decisions than the used to. While some of this may be “kids these days” grousing of the typical kind, at least some data indicates otherwise, and it may be that smartphones are bad for many reasons, like deleterious effects on relationships (an essay I wrote in 2012)—yet few of us will give them up or even significantly restrict usage. I have a smartphone too and annoy friends by being disconnected from it. Expected response times for texts seems overly low to me, but that seems to be the way the culture is moving. We’ve let phones replace places, and that’s not a good trade-off. 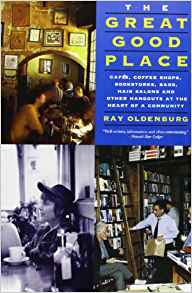 Our biggest barriers to good human space were and are legal and regulatory:

The preferred and ubiquitous mode of urban development is hostile to both walking and talking. In walking, people become part of their terrain; they become custodians of their neighborhoods. In talking, people get to know one another; they find and create their common interests and realize the collective abilities essential to community and democracy.

We take wealth and burn it through hellacious commutes: “The purchase of the even larger home on the even larger lot in the even more lifeless neighborhood is not so much a matter of joining community as retreating from it.” There are solutions, but they’re grasped tentatively and only with tremendous, pointless resistance. We can do better and choose not to.

Some challenges have gotten worse. Oldenburg anticipates the noise plague in today’s bars and restaurants:

Whatever interrupts conversation’s lively flow is ruinous to a third place, be it a bore, a horde of barbaric college students, or mechanical or electronic gadgetry. Most common among these is the noise that passes for music, though it must be understood that when conversation is to be savored, even Mozart is noise if played too loudly.

Vox says restaurant noise levels are climbing; excess noise seems to kill conviviality. Shouldn’t restaurants have figured this out? Or is Oldenburg, like me, just too far outside the mainstream for his view to matter? What should we infer from it is, rather than from what I want to be? I can’t say for sure, but I can say that I pick restaurants and bars based on noise, or the lack thereof.

To me, the most interesting chapter concerned German beer garden versus Irish taverns. In the late nineteenth century, there were two major models for what might now be called bars: German beer gardens that served low-alcohol beer (usually around 3%) and Irish taverns that served potent whiskey. The former catered to families and whole communities while the latter catered to men alone:

Yet it was the Irish model that eventually prevailed. America adapted itself only to the German national beverage; it kept the beer and dropped most of the amenities with which the Germans had surrounded it. The nation never seemed able to allow the concept of a good tavern, and people who cannot envisage good taverns are doomed to have lesser ones.

German beer gardens are probably the better, pro-social model, but they didn’t prevail, and I’m not entirely sure we know why, although Prohibition seems a major culprit.

Another section on the French cafe describes a largely solved problem: Starbucks, along with innumerable specialty coffee shops, solved it. What was a problem when The Great Good Place was published has become a business. Parking and zoning are still serious problems, but a dearth of coffee shops is not.

Third places are overly-idealized in this book (one could write a counter-book about why they’re bad), but it remains an interesting book with a useful set of concepts.