But What If We’re Wrong? is consistently delightful in both sentence and idea quality: the chapters are full of astute observations, like “Something becomes truly popular when it becomes interesting to those who don’t particularly care.” Klosterman’s example here is football and that is indeed a winning way to describe football in U.S. culture (though see here for one account of how football may decline); I don’t care about football and perhaps unsurprisingly I select for friends who don’t really care about it, yet in January I went to a friend’s apartment for he Superbowl anyway because other friends who also didn’t care about football were going. On some level this makes no sense yet we did it anyway. 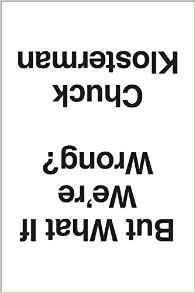 Reality TV has that quality too, and Klosterman discusses it in another chapter. I don’t care about it either, though it has spawned one amazing TV show (UnREAL), at least one excellent novel (Arts & Entertainments), along with lots and lots of good articles. Reality TV producers probably have a better grasp of human psychology than most psychologists. It’s also arguably affected the way people use Snapchat, Instagram, Facebook, and the plethora of other tools we have to broadcast our fabulous, highly edited lives in the sun and exotic locales and so forth. The Real World got to the unreality of living in front of cameras before the rest of us did.

The preceding two paragraphs are mostly digression, but they are digression that may feel somewhat like a Klosterman digression. Klosterman makes one think and makes one want to have a beer with him. He makes me want to write more and better. Not all of the chapters are equally strong—the one that starts out with comments about the role of dreaming particularly stands out in this respect, and I also have found discussions about the simulation hypothesis boring since I first heard them. But the overall effect is to make one think and to make one think something apart from the usual battle lines and lines of thought one hears, and that is valuable in itself.

There are many other excellent facets to the book, which feels like the cleverest conversation you’ve ever had rather than a slog through tedious ideas. There are some predecessors—”What You Can’t Say” also wonders what the present will look like centuries from now, and it asks:

It seems to be a constant throughout history: In every period, people believed things that were just ridiculous, and believed them so strongly that you would have gotten in terrible trouble for saying otherwise.

Is our time any different? To anyone who has read any amount of history, the answer is almost certainly no. It would be a remarkable coincidence if ours were the first era to get everything just right.

So if you believe everything you’re “supposed” to believe, you’re probably doing something wrong (if you believe nothing that you’re “supposed” to believe, you’re probably also doing something wrong, or simply cannot operate in a society that depends on some level of order and coordination). I think Klosterman would agree, although if he said so explicitly I missed it. He does set up the book this way:

What about ideas that are so accepted and internalized that we’re not even in a position to question their fallibility? These ideas are so ingrained in the collective consciousness that it seems fool-hardy to even wonder if they’re potentially untrue.

The ideas that are so accepted are of course the ones we need to question.

Klosterman also recalls the history of failed predictions; my favorite is Paul Ehrlich, who, in 1968, wrote a book called The Population Bomb, about how over-population would annihilate the world; in Klosterman’s words, summarizing Ehrlich, “we should currently be experiencing a dystopian dreamscape where ‘survivors envy the dead,’ which seem true only when I look at Twitter” (that last clause is a good sample of Klosterman’s humor). As most of outside of Syria know, the living do not for the most part envy the dead, growth has continued, and on an inflation-adjusted basis commodities are cheaper than they’ve ever been. We’re on the verge of an energy revolution in which a combination of solar, wind, and nuclear energy will reduce our carbon footprint, while electric cars should dramatically reduce the flow of oil money that is currently propping up despotic regimes like those in Saudi Arabia, Russia, and Iran.

Those predictions are off. So are many predictions about who and what will matter in literature, music, and art. The cultural world of 2016 looks wildly different than the cultural world of 1950, 1900, or 1850, and all of those periods had artistic priorities and worlds vastly different from today’s. As we look backwards from today, the things we find valuable then are different than many of the things that people found valuable at the time. That implies that the cultural world of 2050 or 2100 will probably be different than the world of today, rendering many of our present values and works moot, but in ways that we probably can’t predict, and, “In fact, it often seems like our collective ability to recognize electrifying genius as it occurs paradoxically limits the likelihood of future populations certifying that genius as timeless.”

So far this essay has only discussed a small part of But What If We’re Wrong. There’s much much more. It’s one of the best books I’ve read recently.