[I]f we compare the practices of organized religion and the gym, we can identify many similarities: the faithful of both church and gym travel to a separate building, wear special clothes, eat special food and take part in shared rituals that are performed with complete absorption and dedication. For those for whom religion is no longer a marker of identity, and who do not take part in the social aspects of religious observance, going to the gym fulfils many of the same individual and social needs. The major difference is, of course, that churchgoers polish their eternal souls with a view to attaining happiness everlasting, while gym-goers train their bodies for rewards in the here and now.

That’s from The Temple of Perfection: A History of the Gym, which so far oscillates between thoughtful (as in the quoted paragraph) and exceedingly annoying (“The body, how it is interpreted, represented, used, shaped, and presented in private and public, plays a central role in the transformation of abstract social discourses into lived actions and identities”—which could say, “People interpret other people based on their bodies,” but why use eight words when eighty are available?). Always be wary of writers who use the word “discourse,” because it’s so often a marker of bogosity, and a sign that the writer should read Paglia’s “Junk Bonds and Corporate Raiders: Academe in the Hour of the Wolf.” 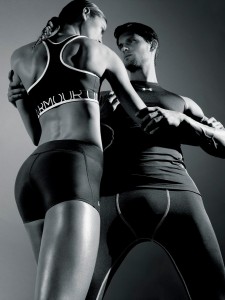 I go to the gym or run most days, and I have a fascination with articles about the saints of apparel industry—like “Skin in the Game: Under Armour knows athletes. Can it sell to everyone else?” (notice the eroticized accompanying photo, shot by someone who knows his business) or “Chip Wilson, Lululemon Guru, Is Moving On.” One does not have to be a writer for Mad Men to see that these companies are trying, perhaps successfully, to tap into mythic associations and aspirations; both articles could fit into Virginia Postrel’s book The Power of Glamour. Glamour is sometimes its own reward.

The gym, at least the one I go to, is more multiethnic than most of my friend circles or the parties I go to. The net of people caught by the squat cage is wider. There are also interesting gender divisions: men do more free weights and women do more cardio (though they’d probably be better served by free weights). Modesty in the gym is however not a virtue, and in most gyms I’ve seen a lot of eye-fucking goes on, for perhaps obvious reasons. If people once met and mated through religious organizations and now do while pressing, one could add this example to Chaline’s book.