Caitlin Flanagan’s well-researched and -argued “The Dark Power of Fraternities: A yearlong investigation of Greek houses reveals their endemic, lurid, and sometimes tragic problems—and a sophisticated system for shifting the blame” does everything an article of its nature should do except for one important thing: talk to the women who go to frats.

The minute women stop going to frat parties, frats are going to either disappear or shrink to irrelevance.

I taught at the University of Arizona for four and a half years and unlike Flanagan have talked to lots of college women about frat parties, few of whom harbor illusions about frat parties or their purpose. Many sororities apparently tell women not to get drunk, since being drunk makes them easy victims, and to go in groups. Women would sometimes say—including in class—that they wouldn’t go to frat parties except in groups. Why? To protect themselves (from themselves or from the frat guys is sometimes an open question).

I’d sometimes ask why they’d go places they felt were sufficiently dangerous to require a group. Usually there wouldn’t be a real answer; it was as if I’d broached a new, un-analyzed subject for the first time. One woman did answer, however, and said simply that “It’s where the party’s at.” 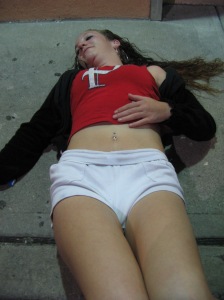 Ten points for honesty, but I think that if I were a woman I wouldn’t go. Yet college girls keep going, despite apparently being aware of the dangers. Flanagan mentions “the issue of sexual assault of female undergraduates by their male peers” but doesn’t note that most women seem to know someone who had something unfortunate happen to them at frat houses, and yet knowledge doesn’t seem to deter many of women.

This absence a huge, obvious blank spot in her otherwise fascinating article. Women are not stupid—at least I don’t think they’re stupid—and most know what they’re doing when they get drunk and/or go to frat parties. I’ve written as much here and here (“It seems that many people go through a two-step process to get what they really want: they drink, which gives them an excuse to decry their actions while drunk at a future date while achieving their hedonic ends—which are often sexual.”)*

Men are interested in frats because they offer a way of forming a cartel that in turn attracts women. I remember talking to a student in a frat, who was giving me the usual bullshit about frats when I stopped him and said: “Let’s conduct a thought experiment: if instead of increasing the probability of a guy getting laid, joining a frat decreased the probability by 1%, do you think anyone would?” There was a long pause. He wanted to respond but he also knew that his intellectual credibility was on the line (he was a bright guy).

There’s another important flaw in Flanagan’s article: while she does cite a horrific rape of a woman identified only as “Jane Doe,” in Doe’s case justice does happen: the perpetrator is caught, arrested, and convicted. The system worked in this instance! The frat helped the cops get the guy. As such it’s a curious example in an anti-frat article.

I’ve also suggested to women in sororities that, if they don’t like frat parties, why don’t the sororities hold parties, and invite men to them? The immediate responses tend to be baffled puzzlement, and sometimes muttering about not wanting to do the work. I leave possible implications of this to the reader.

She does note one thing that deserves more frequent mention:

Furthermore, in 1984 Congress passed the National Minimum Drinking Age Act, with the ultimate result of raising the legal drinking age to 21 in all 50 states. This change moved college partying away from bars and college-sponsored events and toward private houses—an ideal situation for fraternities.

A lot of 18-year-olds like to drink and take other mind-altering substances, and, regardless of whether legislators and/or lobbyists like MADD think they have the capacity to make that decision, many do make it anyway. Perhaps we should continue to try to hector them into stopping using the legal system, but, to my mind, their making of the decision indicates that they have the capacity…to make the decision, since they are making it (I understand and am trying to emphasize the circular reasoning). One way to chip away at the appeal of frats, for both men and women, would be to legalize drinking; based on what I’ve heard a lot of frat boys and sorority girls drift away from their Greek affiliation when they turn 21. Some of that probably comes from the dawning realization that real life is en route but some probably also comes from the opening of different avenues for drinking and mating rituals.

Anyway, the minute the Flanagans and college presidents and parents of the world can convince women not to show up at frat parties is the minute we’ll see the end of frats. Based on America’s bipolar feelings about drinking and sexuality in general, however, I doubt we’re going to see it.

EDIT: I should add that I’m not pro-frat, as one of two people suggested; I’m also not anti-frat, although years ago I wrote this snarky letter to the editor of the New York Times (“Although the fraternity system as it exists is flawed, it does serve one important purpose: it voluntarily segregates a large number of drunken fools from the rest of the student population — some of whom may be interested in novel concepts like learning and academics”). Today I mostly think that frats serve an evident need or want, and although I myself wouldn’t want to join one—I don’t have the right personality—I see why many others do.

* A sorority girl once told me that her sorority cohort didn’t want to attend sober events with frats because the other girls didn’t know how to talk to boys, or talk to boys without the aid of booze.