The Second Machine Age: Work, Progress, and Prosperity in a Time of Brilliant Technologies is worth reading if you haven’t read Tyler Cowen’s Average is Over or the various other books about the influence of computers, networks, and the Internet on society and the labor market. If you’ve already read some of those books, then by osmosis you’ve already The Second Machine Age. 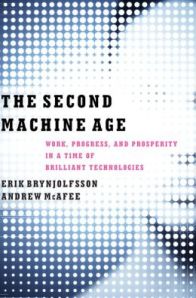 In it many now-familiar stories appear: Moore’s Law, superstar economics, Coming Apart: The State of White America, 1960-2010, chess-playing computers, the importance of teachers in education. Each subject is worthy in itself but much of the content has appeared elsewhere. Brynjolfsson and McAfee are decent writers but no one, except maybe a machine, will mistake them for excellent stylists. They wisely import wits at appropriate moments, thus achieving specialization and appropriately divided labor:*

The journalist A. J. Liebling famously remarked that, ‘Freedom of the press is limited to those who own one.’ It is no exaggeration to say that billions of people will soon have a printing press, reference library, school, and computer all at their fingertips.

Maybe: but we’re also in a race against censorship, as anyone in China knows well. The UK has instituted a mandatory porn filter on ISPs (which is the start of censorship creep) and that filter has already blocked a videogame update; how long until it “accidentally” blocks the opposition party’s website in the days before an election? The revelations from Snowden indicate that the U.S. may already have the ability to shut down Internet “printing presses” or block dissemination of their content. When such efforts are made in the future the reasoning will no doubt involve Protecting Our Children, which is already how the U.S. limits speech and conduct that is distasteful and/or disliked by most voters and the politicians they elect.

The parts about education stand out for their policy implications:

Conclusions by education researchers Ernest Pascarella and Patrick Terenzini [. . .] summarized more than twenty years of research in their book How College Affects Students. They write that ‘the impact of college is largely determined by individual effort and involvement in academic, interpersonal, and extracurricular offerings on campus.’

This work leads directly to our most fundamental recommendation to students and their parents: study hard, using technology and all other available resources to ‘fill up your toolkit’ and acquire skills and abilities that will be needed in the second machine age.

Schools often won’t do this effectively; right now it’s up to students to take on the burden themselves as best they can. But motivation is hard, and many if not all things are more easily imbibed when they’re presented by a guide who knows how to explain by analogy and where to find effective resources for learning. A lot of books are bad and that includes how-to books; one small but rarely stated purpose of teachers and professors is to read thousands of books and then recommend the handful of really good ones, or the ones most likely to be of utility to students. “Good” and “good for young / inexperienced people” are often different and experienced people can forget such an important difference.

Perhaps unsurprisingly, records show that the electric motors did not lead to much of an improvement in performance [in early factories]. There might have been less smoke and a little less noise, but the new technology was not always reliable. Overall, productivity barely budged.

Only after thirty years—long enough for the original managers to retire and be replaced by a new generation—did factory layouts change [to accommodate electric motors]. The new factories looked much like those we see today: a single story spread out over an acre or more. Instead of a single massive engine, each piece of equipment had its own small electric motor.

Universities appear to suffer from this too, as do hospitals; perhaps we will see them change in response to conditions and to pressure generated from rising prices.

I had enough context to read the book in a few hours and wish that I’d waited for a library copy instead of buying. If you’re looking for a big-picture view of the contemporary world that grounds itself in many micro-observations, you should read The Second Machine Age. It will also help you think about your own career and life and where both should go. To some extent everyone is in the technology business, whether they realize it or not.

* Things economists love almost as much as children.