Microsoft just released Office for OS X 2011, and I’ve been using it for the last day. The upgrade is notable for three reasons:

1) Word 2011 is much, much faster than Word 2008. Vastly faster. Did I mention it was faster? Word opens files faster, becomes responsive faster, and randomly hangs less often. Scrolling is much smoother, especially on a 75,000-word novel. I don’t know what Microsoft’s Mac Business Unit did to achieve this, but kudos to them.

2) The “Elements” toolbar at the top of the screen is still there:

I can’t find a way to get rid of it. This is irritating because vertical space is at a premium relative to horizontal space on modern, widescreen monitors. My 24″ iMac has just enough space to fit two full pages side-by-side. Edit: Someone just sent me an e-mail saying that one can turn off this part of the “ribbon” in the ribbon preferences menu. Great news! There’ 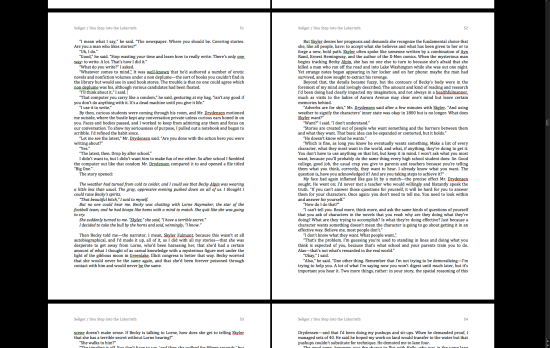 No word (haha!) yet on whether the new version is as crash-prone as previous versions. Word crashes on me at least every couple weeks, usually in ways that are frustratingly random and not reproducible. Find/replace is an egregious cause of crashes.