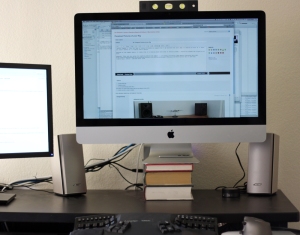 I’m tired of articles like “As PCs Wane, Companies Look to Tablets” You know why PCs aren’t going anywhere? Because they’re cheap. You can buy them reasonably close to cost. If you want the least expensive means of computing possible, you can’t beat PCs now and won’t be able to for years, at the very earliest. Sure, “making them has not been a great business for most American companies for almost a decade,” but that’s because consumers are deriving so much surplus from PCs. They’re not close to commodities. Which is great for buyers, if not sellers.

The industry, the reporters who cover the industry, bloggers, and other people with a stake in the action want you to believe “TABLETS TABLETS TABLETS ARE COOL!!!!” because they want you to buy relatively high-margin tablets. Those tablets are high-margin because they combine commodity hardware with OS lock-in. The industry wants to move closer to Apple’s model, since Apple gets away with what it does because a) it has great design and b) for a long time, and maybe up to the present, OS X was more fun and in some respects better designed than Windows. Lock-in and high margins? What’s not to love from a business perspective?

It’s also not very much fun for journalists and bloggers who drive these stories about PCs to write stories that say, “Area man continues to derive immense intellectual, social, and efficiency value from the PC he bought five years ago and which continues to meet his needs adequately.” I wouldn’t read that story or post either. The larger tech press needs to find something to hype. In this case, of course, tablets and cell phones are genuinely big deals and their impact will continue to reverberate—but just because one sector is waxing doesn’t mean another is automatically waning. Especially when that sector offers a lot of value for the money.

So: every time you see a call for tablet computing, regardless of its source, you should remember that somewhere behind it, there’s a manufacturer who wants to sell you more stuff at higher prices. Paul Graham calls such beasts “the Submarine,” and if you want to understand how you’re being marketed to, you should read that essay. The PC manufacturer can’t really sell you more stuff in PC laptops and desktops these days because they’re too inexpensive and interchangeable. Apple can sell you design and an unusual operating system. Maybe Lenovo can charge above-average prices because of the Thninkpad’s reputation for durability, but that’s it. Everyone else is scrambling because consumers dominate producers when it comes to PCs. So we get stories like the one above; and, if, as Tyler Cowen speculates in this example, the U.S. economic model moves closer to Japan and capital depreciates, expect to see even more calls for tablets and so forth. Anything to avoid acknowledging that an existing stock of capital is Good Enough.

And you can expect to see misleading headlines like the one above. It’s frustrating to read stuff like this:

How does an increase in the absolute number and the percentage of PCs sold an indicating of waning? I think that means computer makers will ship over a hundred million units, compared to a quarter as many tablets. I checked out Dell’s website, and one can buy a very nice Inspiron desktop with a dual-core AMD processor, 3 GB of RAM, and a 1 TB hard drive for about $400. Get a cheapie 20″ monitor, and you’ve got a very competent machine that’ll run Windows passable well for under $600. Get a sweet 24″ IPS monitor as good or better than the one in my 2007 24″ iMac for another $500, and you’re still under $1,000. That’s why desktops aren’t going anywhere and all this blah blah blah about tablets is important but also overrated by tech sites chasing the new shiny but who also think that everyone has, if not an unlimited budget, then at least a very substantial one for technical toys. Given my work, it’s probably not surprising that I have a higher-than-average budget for technical toys and tools, since I use my computer every day and often for very long stretches, but for people who aren’t writers, hackers, day traders, pornographers, and the like, having an expensive computer and a tablet and a phone is, if not overkill, then at least overpriced.

Some people get this—here’s a Time story that’s as an example—but too many don’t, especially in the press, which follows the tech industry like a marketing arm instead of an independent evaluator.

One more point: PCs are still better for some tasks. Maybe not for browsing Facebook and YouTube, but anything that requires a keyboard isn’t just better on a computer—it’s way better. Maybe students are going to write papers on iPads or iPad-like devices, but I’m skeptical, and even if one has a couple of substantial text-writing efforts a year, it’s going to be tempting to keep a keyboard around. I could be crazy; people are apparently writing novels on cell phones in Japan and now other countries, but producing a novel on a phone doesn’t sound appetizing from the perspective of either the writer, who can’t really get in the zone over the course of a hundred words, or the reader, who has to endure writing from someone who doesn’t appear to, say, go back and edit their novel as a coherent whole. Most people don’t seem to much like 19th Century novels that were published serially, and I think “lack of editing” and “lack of brevity” might be two reasons, and the first will probably come back to haunt cell phone novelists.

Then again, looking at the bestseller lists, maybe there isn’t much to go but down.

Yeah, which is why the “post-PC” terminology has a propaganda tone. It’s not going to be “post-PC”: more like “pop computing” or “computing lite”.

He’s right. Which is okay: I have nothing against tablets, cell phones, and so forth. Use whatever works. Just don’t pretend PCs are going away or automatically declining.

See also this post on whether you should buy a laptop or desktop and this related post on the reliability of each form factor.