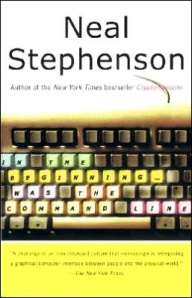 A few days ago, I was reading Neal Stephenson’s incredible essay “In the Beginning was the Command Line,” which you can download for free at the link. His work can’t really be summarized because the metaphors he develops are too potent and elaborate to flatten into a single line that describes what he does with them; by the time you finish summarizing, you might as well recreate the whole thing. Despite the folly in attempting summarization, I want to note that he’s cottoned on to the major cultural differences between Windows, Macs, and Unixes like Linux, and by the time you’re done you with his essay realize the fundamental divide in the world isn’t between right and left or religions and secular, but between contemporary “Morlocks” and “Eloi,” the former being the ones who run things and the latter being the ones who mostly consume them (you can see similar themes running through Turn On, Tune In, Veg Out and Anathem). In the meantime, visual culture has become a poorly understood but highly developed global force bathing virtually everyone in its ambiance, and that might not be such a bad thing most of the time. The last issue doesn’t have that much to do with this particular post, but if you want to understand it, and hence an aspect of the world, go read “In the Beginning was the Command Line.”

He wrote the essay in 1999, and the problem with operating systems, or “OSes” in nerd parlance, is that none of them were very good. They crashed frequently or were incredibly hard to use, especially for Eloi, or both. In the last ten years, they’ve gotten much less crashy (OS X, Windows) or much easier to use (Linux) or both, to the point where the differences to a random user who wants to write e-mails, look at YouTube videos, browse for adult material, and look at FaceBook status updates probably won’t notice the quirks of each operating system. Games are a major difference, since OS X and Windows have lots of modern games available and Linux doesn’t, but if you don’t care about games either—and I don’t—you’ll want to discount those.

Some of the major technical differentiators have shrunk: on OS X, you can now communicate with your machine using the Terminal; on mine, I’ve changed the color scheme to trendy green-on-black. Windows has a system called PowerShell, and Linux has various ways to hide the stuff underneath it. But the cultural differences remain. Windows machines still mostly come festooned with ugly stickers (“These horrible stickers are much like the intrusive ads popular on pre-Google search engines. They say to the customer: you are unimportant. We care about Intel and Microsoft, not you”) and a lot of crap-ware installed. OS X machines look like they were designed by a forward-thinking 1960s science fiction special effects person for use by the alien beings who land promising peace and prosperity but actually want to build a conduit straight into your mind and control your thoughts. Linux machines still sometimes want you to edit files in /src to get your damn wireless network working. Given the slowness of cultural change relative to technical change, it shouldn’t be surprising that many of Stephenson’s generalizations hold up even though many technical issues have changed.

This throat clearing leads to the subject of today’s much-hyped launch of Apple’s latest operating system, which is an incremental improvement to the company’s previous operating system. I’ve been using Macs since 2004. I started with an aluminum PowerBook that you can see in this appropriately messy picture. In that time, I’ve steadily upgraded from 10.3 to 10.6, but the move from 10.5 to 10.6 didn’t bring any tangible benefits to my day-to-day activities. It did, however, mess up some of the programs I used and still use regularly, which made me more gun-shy about OS updates than I have been previously. Now 10.7 is out, and you can read the best review of it here. It’s got a bunch of minor new features, most of which I won’t use and are overhyped by Apple’s ferocious marketing department, which most people call “the press.”

I’ve looked at those features and found nothing or nothing compelling. Many are aimed to laptops, but I don’t use a laptop as my primary computer or have a trackpad on my iMac, and it seems like the “gestures” that are now part of OS X, while useful, aren’t all that useful. Apple is also integrating various Internet services into the operating system, but I don’t really care about them either and don’t want to pay for iCloud. I don’t see the point for the kinds of things I do, which mostly tend towards various kind of text manipulation and some messing around with video. It’s not that I can’t afford the upgrade—Apple is only charging $30 for it. I just don’t need it and simultaneously find it annoying that Apple will only offer it through their proprietary “app store,” which means that when I need to reinstall because the hard drive dies I won’t be able to use disks to start the machine.

Still, those are all quibbles of the kind that start boring flame wars among nerds on the Internet. I’ve saved the real news for the very bottom of the page: it’s not about Apple’s OS upgrade, which, at one point, I would’ve installed on Day 1. I remember when OS X 10.4 came out, offering Spotlight, and I was blown away. Full-text search anywhere on your machine is great. It’s magical. I use it every day. Even 10.5 finally had integrated backup software. But 10.6 had a lot of developer enhancements I don’t use directly. Now, 10.7 has improved things further, but in a way that’s just not important to me. The real news is about how mature a lot of computer technology has become. By far the most useful hardware upgrade I’ve seen in the last ten years is a solid state drive (SSD), which makes boots times minimal and applications launch quickly. Even Word and Photoshop, both notorious resource hogs, launch in seconds. New OS versions used to routinely offer faster day-to-day operation as libraries were improved, but it’s not important to move from “fast enough” to “faster.” The most useful software upgrades I’ve seen were moving from the insecure early versions of Windows XP to OS X, and the move from 10.3 to 10.4. The move to 10.7 is wildly unexciting. So much so that I’m going to skip it.

If you look at the list of features in 10.7, most sound okay (like application persistence) but aren’t essential. I rather suspect I’m going to skip a lot of software and hardware upgrades in the coming years. Why bother? The new iterations of OSes aren’t likely to enable me to be able to do something substantial that I wasn’t able to do before, which, in my view, is what computers are supposed to do—like most of the things we make of buy. If you’re an economist, you could call this something like the individual production possibility curve. Installing Devonthink Pro expanded mine. Scrivener might have too. Mac Freedom definitely has, and I’m going to turn it on shortly after I post this essay. The latest operating system, though? Not so much. The latest software comes and goes, but the cultural differences—and discussions of what those differences mean—endure, even as they shrink over time.