In 2008 I moved in Tucson for grad school and rented a condo that turned out to be a decent place to live, except for the landlord and a neighbor universally referred to as “Crazy Nick” (he was not crazy in a good way). When my roommate and I moved, the landlord kept about $500 of our deposit after promising that he wouldn’t and saying that he’d refund it. Stealing our security deposit violated Arizona’s Residential Landlord & Tenant Act, which regulates the usual tenant-landlord problems.

Because I’m such a smart guy and was both unhappy about his lies and interested in our money, I decided to sue him in small claims court, where I eventually won a $1,350 judgment. He paid $350 after a debtor’s hearing in January and promised to pay the rest; in June I sought another debtor’s hearing to compel him to pay at which point he threatened to come over to my apartment and kill me. For those of you keeping score, this marks the second time someone has done so in one summer, up from zero times previously in my entire life.

I filed a police report, stayed at friends’ houses for a few days, and canceled the hearing: improbable though Abedian’s threat might be, it’s not worth shooting or being shot over $1,000. He’s also a cipher to me: all I know is that he works in a carpet store, bought a condo in Tucson near the height of the ’00s real estate boom and, according to a Google search, might have his house foreclosed on. In other words, he might be desperate, and people have killed each other over far less than $1,000.

Although running away sets a bad precedent—will he just threaten to kill the next tenant who comes along? am I not doing the right thing for my fellow man—I still think capitulating wiser than continuing.

What originally seemed to mostly be entertainment (i.e. going to court and pontificating), began to suck up way too much mental energy. In the Hacker News discussion of Paul Graham’s “The Top Idea In Your Mind,” grellas wrote, “There is a lesson here about lawsuits, which will drain you of both money and peace of mind all at the same time. Sometimes you can’t turn the other cheek, much as you would like to do so, and have no choice but to fight. Having the guts to stand up for yourself (or for your company) is in itself a virtue and there are times when it is best not to walk away.”

He’s right, and a lawsuit I’d imagined as entertainment and teaching a useful lessons that might turn into dividends for the next tenants backfired. It also occupied way too much space in my mind—space that I should’ve spent writing or doing research. Instead I worried about the sanity and desperation of a guy I didn’t know and who was probably armed.

In Francine Prose’s novel Touch, the protagonist is a 14- or 15-year-old girl named Maisie, who tells her preening stepmother, Joan, a version of what happened on a bus when two or three boys touched her breasts in somewhat murky circumstances. It isn’t clear at the narrative’s start whether she consented, but the event as narrated to us is also one in which the characters act without enough culpability to call what they did anything beyond adolescent horseplay and power struggles.

Joan wants to meet a lawyer, which makes Maisie think that “I was filled with dread. Pure dread. It felt like icy water trickling down my back.” Joan says, “It would be a matter of principle.” Most people don’t lead their lives solely according to principle; pragmatics matter too. Few of us want to be martyrs for a cause, and if we do, that cause better be worth it. Most of us want to get along. Altruistic punishment is real but can be overrated. Maisie would be harming her own well-being and self-interest. I thought I was standing up for the principle of tenants’ rights and for fairness, but I chose to give up that principle when Navid threatened to kill me. Pragmatics won.

Like Maisie, I’m choosing pragmatism—which I probably should’ve learned in the first place. I’ve started Bleak House a couple of times (I’m not a Dickens fan) and understand Jardyce vs Jardyce well enough to know that lawsuits are often vehicles for mutually assured destruction more than they are about fairness or rights. When in doubt or when it’s avoidable, don’t get the law involved. And, apparently, be ready to write off your security deposit. 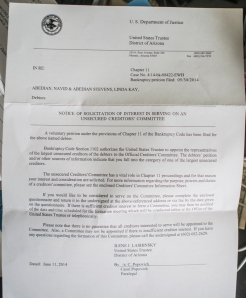 EDIT: It’s 2014 and I’d mostly forgotten about Navid, but I just got a letter saying that he declared bankruptcy. I’m a) somehow listed as a creditor and b) the Department of Justice somehow got my current address, in order to c) invite me on some kind of creditors’ committee. I wish I couldn’t say that I don’t feel a little schadenfreude, but, alas, I’m too small a person. Apparently his wife or ex-wife, Linda Kay Abedian Stevens—or Linda Kay Stevens? the wording is unclear—was also on the lease and on the property deed.

Since leaving Tucson I have been threatened with death zero times.