The main question regarding the Das Keyboard Professional Model “S” should not be whether it’s a very nice keyboard: it is. The keys are precise and smooth, and the amount of force necessary to generate a letter is far more appropriate than the standard keyboards shipped with most computers. Rather, the main question should be: is the Das Keyboard substantively better than the Unicomp Customizer and Space Saver, both of which use the time-tested IBM Model M design and manufacturing equipment? The answer is probably “no,” especially when one considers their relative cost: as of this writing, the Unicomp keyboards are $69 and made in the United States, while Das Keyboards are $129 and made in Taiwan.*

The slim keyboard and its housing:

As shown, the Das Keyboard is black and unadorned by anything save a “daskeyboard” logo in the upper right. The keys themselves are matte black with white letters etched in by laser, while the borders are glossy and probably prone to fingerprints and smudging over time. The attractive minimalist design makes the keyboard look like part of a set when placed next an iMac and Aeron, as though it were designed to complement them.

The chief drawback aesthetically and practically is the split USB cord: 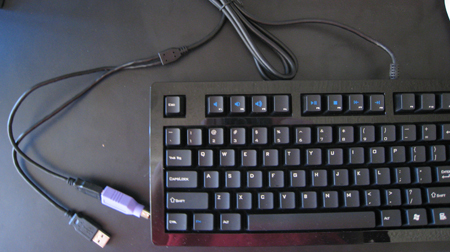 Not surprisingly, a picture like this doesn’t appear on the Das Keyboard website. It’s reminiscent of the Matias Tactile Pro 2, and not in a good way.

But the Das Keyboard does have two USB ports on the side, which is a useful feature the Customizer lacks. To me it doesn’t make much of a difference: I taped a four-port, powered USB hub to the bottom of my desk, and that’s where I plug in peripherals, my printer, and an iPhone cord. The hub cost $10, like the one at the link, although I bought mine elsewhere.

Each stroke brings a satisfying but muted clack, and I like typing on the Das Keyboard. Its keys don’t travel quite as far as the Customizer or Space Saver’s; it’s also easier to bottom out because one doesn’t have the curious resistance that a buckling spring provides, as described here:

The most widely produced buckling-spring keyswitch keyboard is the IBM model M keyboard. When pressing an individual key, the operator is physically applying increasing force (approximately 60-70 grams of force) against a coiled spring. The spring provides slight resistance, so that you can rest your fingers on the keyboard and not cause an accidental or inadvertent key press. Once the key travels a particular distance (approx. 2.5 – 3.5mm), the spring reaches the “catastrophic buckling” point and produces an audible click at the same exact instance that the computer records the keystroke.

With the Das Keyboard, you can still rest your fingers on the keys, but when typing you won’t have the catastrophic buckling that prevents bottoming out. Consequently, the Das Keyboard has a slightly harsher feel than the Customizer or Space Saver. It seems to take approximately the same amount of force to generate a keystroke, but that’s based solely on feel rather than on testing. There might be an objective difference between the two, but if so, it’s not great.

The key switches themselves appear to Cherry MX Blues, which are explained in greater detail at the link and in this Hot Hardware essay. You can see them in the Das Keyboard here: 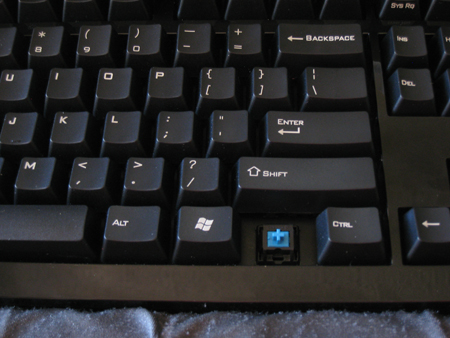 These switches are louder, though not enormously so, than the Cherry MX “Brown” switches found in the Kinesis Advantage Ergonomic Keyboard, which I reviewed at the link, or the Majestouch Tenkeyless Keyboard. You could use the Kinesis Advantage or Majestouch Tenkeyless keyboard in a dorm or office without offending those in the same room, but the Das Keyboard is probably too loud for those environments. I assume the “silent” version uses Cherry MX “Brown” switches that are quieter and also appropriate for group settings. To get a sense of how loud each keyboard is, check out this video, which compares the Advantage, Customizer, and Das Keyboard:

What do all these models mean?

Here’s how the somewhat confusing nomenclature and model numbers work: A Das Keyboard “Professional” means there are letters on the keyboard, like mine; not having any letters doesn’t seem to confer any benefit aside from sheer geek street cred, about which I care less than practicality. A Das Keyboard “Ultimate” is identical to the “Professional” except that it’s blank. The Das Keyboard “Silent” is quieter, presumably due to using Cherry MX “Brown” switches like those mentioned above.

The Original Das Keyboard Professional lacks media function keys, has only a single USB connector, isn’t compatible with KVM switches, and doesn’t have “Full n-key rollover,” which means that if you mash, say, six keys at once, the keyboard might not register all of them. The last feature is apparently useful for gaming. The short version is that the differences between the “Original” and “Model S” are marginal and not very important. Given the choice, I’d probably take the original.

The Das Keyboard supports OS X and Linux as well as Windows. You can buy a set of Mac- and Linux-friendly keycaps for $14.95, which is comparable to Unicomp’s cost for OS-specific keys. You’ll have to swap the Option and Command key in OS X’s system preferences, as described here.

Edit Nov. 12 2009: Thomas Aitchison of Das Keyboard sent me an e-mail saying that the problem I described below is a known bug and that the company is recalling the keyboards in the affected serial number range, so this probably no longer applies.

Every couple hours, a key would stop working. The first time it was the “e:” I typed “swt” instead of “sweet” in TextMate. The same thing happened in Word and Mellel. But when I plugged the keyboard into my MacBook, the “e” was back, and switching back to my iMac also solved the problem. The same thing happened a few hours later with the “control” key. Unplugging the keyboard and plugging it back in did the trick. It happened again with the “p” key, and presumably with others that I hadn’t noticed because I didn’t use them.

In addition, the remapped “option” key doesn’t function properly. In OS X, option-shift-hyphen generates an em dash, like this: —. But I had to remap the caps lock key to option to generate that dash. I have no idea why. This hasn’t happened with any of the other keyboards I’ve used with this computer: the Matias Tactile Pro, the Customizer, the Advantage, or the Apple Aluminum Keyboards. I assume this is a problem unique to this particular Das Keyboard or to this Das Keyboard with my iMac; if this happened with a purchased computer, the company promises “For repair and exchange: no waiting, no hassle. We will ship you a replacement as soon as we receive your shipment.”

My girlfriend used the Das Keyboard for a day and didn’t like it as much as I did: she said she heard a high-pitched squeak from it. Of the keyboards I’ve tried recently, she likes the Kinesis Advantage best. In comparison to the Unicomp Customizer, she wrote, “WAY better than the daskeyboard. […] It takes a little more effort, and maybe I’ll find at the end of the day my muscles aren’t a fan of it, but for now, it’s definitely better. Feels more solid.”

Even Das Keyboard’s website says that “Das Keyboard compares to the legendary IBM model M. Its best-in-class mechanical gold-plated key switches provide a tactile and audio click that makes typing a pure joy.” They’re right: it does compare to the Model M. Either keyboard is an good choice. If I had to make it, I’d take the Model M. Its durability is proven, the key travel is slightly better, and it sounds slightly more like a typewriter and slightly less “plasticky” to my ears. In addition, it’s about $50 cheaper after shipping. The only drawback is the lack of USB ports, which seems minor in comparison to how the keyboard feels.

EDIT: I wrote a long post on what I think of the the Kinesis Advantage, Unicomp Space Saver, and Das Keyboard two years later.

* I don’t highlight where the keyboards are made out of a misplaced and ignorant jingoistic nativism, but rather because, all else being equal, I’d generally choose the item made in a western country (Canada, the United States, most of Europe) over one not made there under the assumption that the workers are probably treated better and make living wages. Taiwan is an industrialized country, so this probably doesn’t apply, but I notice the difference anyway. In addition, products made elsewhere usually cost less; I find it suggestive that, in this case, the opposite is true.

* Note: The review unit was provided by Das Keyboard and returned to the manufacturer after this review was written.