I like Rapture but it’s not for everybody: it’s too focused on relationships, too explicit (though I would prefer the word “realistic,” many would disagree), too much about artistic educated urban people who want some things that are incommensurate with other things, too didn’t-Anna-Karenina-already-do-this?. It dissects the moment into a million little pieces, like Ian McEwan’s On Chesil Beach; we experience a succession of moments in a rush, and in writing we can slow them, reexamine them, reexperience them, or experience them from a new vantage. 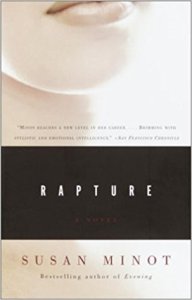 Still, to my mind it’s about three people who aren’t ready or able to leap towards the obvious relationship-structure conclusion, even if the wrapping around that core idea is Kay’s afternoon with Benjamin. The narrative perspective shifting from Kay to Benjamin and back. Their thoughts are not so dissimilar but retain dissimilar enough to retain interest. They think in similar ways, as perhaps people in similar milieus and with similar “wrong” desires might. Neither Benjamin nor Kay knows each other, like we all don’t really know anyone, and we get that from the first page:

He had no idea what had gotten her there.
He certainly wasn’t going to ask her about it. There was no way he was going wade into those dangerous waters and try to find out why she’d changed her mind…

Probably wise on his part. We also get a similar idea later on, midway through: “What did other people know about what really went on inside a person?” Some things are unknowable, and fiction likes to remind us of this.

A few pages into the novel, we switch to Kay’s perspective for the first time:

It was overwhelming, the feeling that this was pretty much the only thing that mattered, this being with him, this sweetness, this . . . communing . . . this . . . there was no good word for it.

It raises questions: how much does “pretty much” elide here? And if this is “pretty much the only thing that mattered,” why do we spend so much time and energy doing other things, like building civilization? This is an analytic novel, so Kay doesn’t answer, but we might consider it as we read. I also don’t know what to do with later, similar thoughts, like “This was real, this was the most real thing.” Getting down to what is really real is tricky, and answers tend to vary based on the moment a person happens to be in. Are things that matter real? Are real things things that matter? I don’t know either.

Sometimes the vision is blank:

He shut his eyes. He saw the empty landscape. He knew he had to get out of bed and get going and soon, but he was mesmerized by this vision of emptiness. It was telling him something.

Maybe I like the novel because I’m working on one that uses somewhat similar narrative perspective on material that isn’t so different. We all fantasize about knowing what someone else is thinking, but only in fiction do we actually get to switch perspective to see. That fantasy is as potent as flying, and while we can fly via planes or rockets or other external apparatus, we never get to fly the way we do in our dreams.