The University of Arizona wants its books back, and many of them have been renewed three or more times and have been squatting in my apartment for more than a year. It’s time to declare library bankruptcy and admit to myself that many of the worthy books towards which I once had such noble and good intentions simply aren’t going to get read: 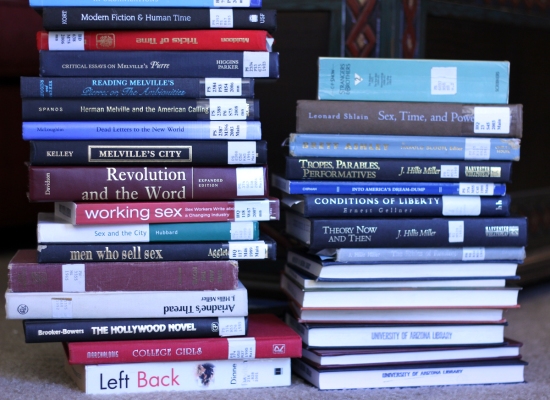 (I scrounged up a few others, too, because library books proliferate like bad ideas on the Internet if you’re not fastidious about corralling and curtailing them.)

I could imagine some of them being checked out again—the ones about Hollywood novels, or J. Hillis Miller’s work. But Critical Essays on Melville’s Pierre seems like an unlikely choice, and in the immediate future I still have lots of books I’ve picked up from libraries or friends, or been sent by publishers (thanks, publishers!), or that I need to read for exams or my own work. This stack feels a bit like failure, but sending it back also feels like the proverbial fresh.

Have you declared library bankruptcy before? If so, how’d it go?

Even sending back books I know I’m likely to read feels curiously bad, like I’m quitting a race three quarters through.