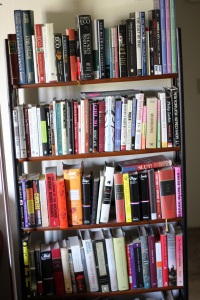 Increasingly, perhaps, a job is something that we each have to create. We can’t count on someone else to create one for us. That model is disappearing. We have to carve something out for ourselves, something that the machines won’t immediately grab.

Bowermaster is describing on a macro scale what I try to do a micro scale with the papers I assign to students. The important part of my assignment sheets for freshman composition papers are only two paragraphs long, and students sometimes find them frustrating, but I do them this way because the world is headed in a direction that offers less direction and more power to do the right or wrong thing. Here’s an example of an assignment sheet:

Purpose: To explain and interpret a possible message or messages suggested by a) a text or texts we have read for class, b) a text or texts in Writing as Revision, or c) a book of your own choosing. If you write on a book of your own, you must clear your selection with me first. Your goal should be persuade readers of your interpretation using the texts studied and outside reading material.

You should construct a thesis that is specific and defensible and then explicate it through points, illustrations, and explanation. See Chapters 8 and 9 of A Student’s Guide To First-Year Writing for more information on the nature of textual analysis.

That’s it. Students can read more about the assignment if they want to, and they have a lot of freedom in picking a topic. Students often want more direction, which I give to some extent, but I don’t give step-by-step instructions because a) step-by-step instructions yield boring papers and b) in their real-life writing, the real challenge isn’t the writing. It’s the deciding what to write about and how to write once you’ve decided to start. The writing assignment often isn’t given; the writing assignment is made.

It’s a big leap to go from “write-a-good-paper” assignment sheets to conceptualizing “a job [as] something that we each have to create.” Maybe too big a leap. But the thinking and rationale behind my decision is clear: jobs that can be easily codified and described as a series of steps—jobs that are easily explained, in other words—are increasingly going away, either to off-shoring or automation. The ones that persist will be the ones that don’t exist now because no one has thought to do them. But a lot of school still appears to consists of a person in front of the room saying, “Follow these steps,” having the students follow the steps, and then moving on.

That model isn’t totally wrong—you can’t create something from nothing—but maybe we should more often be saying, “Here’s the kind of thing you should be doing. What steps should you take? How should you take them? Do something and then come talk to me about it.” That kind of model might be more time consuming and less easily planned, and I wouldn’t want to use it in every hour of every day. Many basic skills still need to be taught along the lines or “This is how you use a comma,” or “this is how an array works.” But we should be collectively moving towards saying, “Here are some constraints. Show me you can think. Show me you can make something from this.” And class isn’t totally devoid of support: unlike the real world, class has mandatory drafts due, lots of discussion about what makes strong writing strong, and the chance to see other people’s work. The imposed, artificial deadlines are particularly important. It’s not like I hand out assignment sheets and shove students out to sea, to flounder or float completely on their own.

Still, from what I can see, the world is increasingly rewarding adaptability and flexibility. I don’t see that trend changing; if anything, it seems likely to accelerate. If schools are going to (collectively) do a better job, they probably need to work on learning how to teach adaptability in the process of teaching subject-specific material. Offering the kinds of assignments I do is a microscopically small step in that direct, but big changes usually consist of a series of small steps. The assignments are one such step. This post is another.

In “A Welcome Call to Greatness,” John Hagel discusses That Used to Be Us, a book by Tom Friedman and Michael Mandelbaum that discusses what Hagel calls “creative creators” – “people who do their nonroutine work in distinctively nonroutine ways.” And that’s what I’m trying to do above: train students into being able to do nonroutine writing of a sort that will be distinctive, interesting, and well-done, but without a great deal of obvious managerial oversight from someone else. Great writing seldom springs from someone micromanaging: it springs from discussions, ideas, unexpected metaphors, connections, seeing old things in new ways, and form a plenitude of other places that can’t be easily described.

In “The Age of the Essay,” Paul Graham says:

Anyone can publish an essay on the Web, and it gets judged, as any writing should, by what it says, not who wrote it. Who are you to write about x? You are whatever you wrote.

He’s right. The most challenging writing most of my students will do isn’t even going to have the opportunity for someone else to micromanage it. The writing will increasingly be online. It will increasingly be their own decision to write or not write. As Penelope Trunk says, it will increasingly be essential for a good career. It won’t be routine. As I said above, routine work that can be codified and described in a series of steps will be exported to the lowest bidder. Valuable work will be the work nobody has dreamt up. Jobs will be “something that we each have to create.” I’m sure a lot of people will be unhappy with the change, but the secular forces moving in this direction look too great to be overcome by any individual. You surf the waves life and society throws at you, or you fall off the board and struggle. The worst cases never get back on the board and drown. I want students to have the best possible shot at staying on the board, and that means learning they can’t assume someone else is going to create a job—or an assignment—for them. They have to learn to do it themselves. They need to be creative. As Hagel quotes Mandelbaum and Friedman as saying, “Continuous innovation is not a luxury anymore – it is becoming a necessity.” I worry that too few students are getting the message.

I think of some of my friends who are unemployed, and when I ask them what they do all day, they say they spend time searching for a job, hanging out, watching TV. To me, this is crazy. If I were unemployed, I’d be writing, or learning Python, or posting on Craigslist with offers to work doing whatever I can imagine doing. The last thing I’d be doing is watching TV. In other words, I’d be doing something similar to what I’m doing now, even when I am employed: building skills, trying new things, and not merely sitting around waiting for good things to come to me. They won’t. Good things are the things one makes. Most of my employed friends seem to get this on some level, or have found their way into protected niches like teaching or nursing. I wonder if my unemployed friends had teachers and professors who forced them to think for themselves, or if they had teachers and professors who were content to hand them well-defined assignments that didn’t require much thinking about the “how” instead of the “what.”