I’ve only lived in Europe—and even then it was England, where I found that many people considered the country not part of Europe—briefly, but like Megan McArdle and Matt Welch, I “found it noticeably poorer than the United States.”

The debate is mostly symbolic and a proxy for U.S. healthcare issues, about which I know sufficiently little to not comment in public. Nonetheless, the living standards issue comes up because McArdle writes about “The Difference Between the US and Europe” in response to Paul Krugman’s comments on the same, where he says:

Actually, Europe’s economic success should be obvious even without statistics. For those Americans who have visited Paris: did it look poor and backward? What about Frankfurt or London? You should always bear in mind that when the question is which to believe — official economic statistics or your own lying eyes — the eyes have it.

McArdle and Welch think otherwise. My limited experience occurred at the University of East Anglia (UEA), which is in Norwich. The school was noticeably more run down than any university I’ve seen in the U.S. The dorm cots—they weren’t really beds—were tiny and hard; the desks made the ones at Clark University, where I was an undergrad, wonderful by comparison; and the campus had a general feeling of dilapidation that was enhanced by graffiti on walls.

That was just the physical plant. Classes were only taught for six hours a week. I have no idea what most students did the rest of the time. There were in effect no meal plans, so students were supposed to do their own cooking in dirty communal kitchens. To use the gym, one had to pay £6 to take a useless orientation class and then pay £1 or £2 to get in every time thereafter. It was so bad that a friend and I wrote a document called “About UEA” and e-mailed it to others at our home schools. Bathrooms were—charitably—vile. 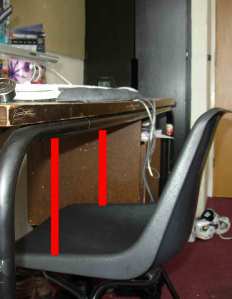 But wait! Aren’t dorms terribly everywhere? Maybe so, but in the limited number of places I’ve spent some time in or on dorm beds, none have been nearly as bad as UEA’s, and that includes Clark, the University of Washington, Seattle University, Harvard, USC, and the University of Arizona. This isn’t a full sample, but the difference was obvious. So was the price of books, which did help explain why so many excellent used bookshops popped up but didn’t help the £10 trade paperback price or hardcover prices that verged on £20.

Perhaps because of exchange rate issues, the UK also felt very expensive. “Expensive” and “worse” is a bad and unusual combination.

The debate reminds me of the New York Times piece, “We’re Rich, You’re Not. End of Story,” which studies how rich Scandinavian countries feel relative to the U.S., Spain, and others:

After I moved here six years ago, I quickly noticed that Norwegians live more frugally than Americans do. They hang on to old appliances and furniture that we would throw out. And they drive around in wrecks. In 2003, when my partner and I took his teenage brother to New York – his first trip outside of Europe – he stared boggle-eyed at the cars in the Newark Airport parking lot, as mesmerized as Robin Williams in a New York grocery store in “Moscow on the Hudson.”

The plural of anecdote is not data, and I like what I’ve seen of European cities, especially because they feel more like cities and less like giant suburbs than places like Tucson, Arizona do. Europe is a lovely place in many respects and has decided, as a continent, on a different set of trade-offs than the United States. But the difference in living standards is noticeable, at least to me, and evidently to others, at a given income level; if you have enough money, almost anywhere can be nice.

EDIT: I uploaded “About UEA,” a document a friend and I wrote to warn our other friends about life at UEA. Commenters say the university has gotten better since, but I can’t tell if they’re astroturfers or the real thing.

EDIT 2: It appears that Britain has a well-known and measurable productivity gap, which is elaborated on and explained at the link. The post is interesting throughout and you should really read it, including this:

I’ll never forget the first time I visited the Netherlands in 1985. I was in Dordrecht and reading through the comments of a guest book for a modest hotel. The writer was British, and apparently was visiting the Continent for the first time. He/she expressed shock at seeing that virtually everywhere in the Netherlands was a nice place, compared to the home country, much of which was not so clean and not so nice. He/she lamented and apologized for this feature of Great Britain, and that is yet another way of expressing the productivity gap.