EDIT 2014: I’ll skip preliminaries and say that I now use Pigma Micron pens, usually very thin .25 or .2mm, for most purposes. They’re less fussy than the pens below and yield the best, thinnest, most consistent lines. Fountain pens have too many problems for someone like me, who writes on the go and isn’t trying to baby the pen or make it an art object. The discussion below is still valuable.

A good pen is a wonderful thing, and its connection to the right paper is one of those tiny victories that accumulate and sometimes affect us more than the major and obvious ones. I’ve sought such a victory recently: like many people, I become fond of the particular pens I use over time and bond with them, imagining that the pen is an extension of myself. That effect isn’t limited to pens, as my post on keyboards and other tools shows, and I become attached, perhaps irrationally, to the tools I use on a regular basis. Since my life is bound up with writing, such tools tend to mean pens, notebooks, computers, and computer programs.

The difficulty comes in finding the right one. So I decided to try a variety of pens, each of which seemed plausible based on its description and reputation. Part of my contest was inspired by the blog “Rands in Repose,” where a post about the “Joy Vectors” and The Gel Dilemma made me realize I had more choices. In other words, Rands underwent a similar pen crisis to mine. I’ve chiefly used fountain pens over the last few years: I like the way many of them write and didn’t mind the occasional hassles around cleaning, leakage, and upkeep. Somewhere in the last six months, however, the once-minor downsides regarding fountain pens became steadily more acute because I’ve been writing by hand much more often, and the Omas Paragon I began using with Baystate Blue ink has a habit of leaking in a most irritating way.

Moving back to a Mont Blanc Noblesse Oblige solved the problem temporarily, but the cap is loose—requiring a $45 repair to fix it. I don’t feel like paying when disposable pens are readily available and quite inexpensive. And the fountain pens I prefer have extra fine points, which require me to write slightly slower. This isn’t a big deal when you’re chiefly writing notes to yourself or marking your own work, but when I have 50 papers to grade and at least six hours of note taking per week, the difference adds up. If you’re running half a mile, the difference between a 7:10 and a 7:00 minute mile are marginal. Over a marathon, they add up.

With that in mind, I found the following pens: 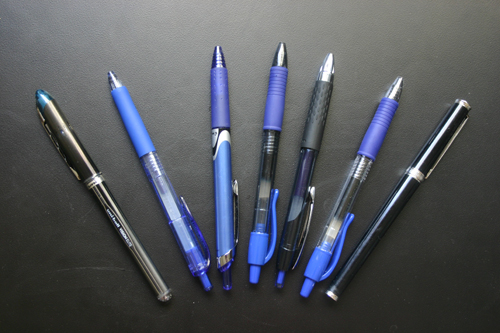 I sought a pen that wrote with a very fine line, had color that didn’t smear or bleed and looked good to me, wrote swiftly and smoothly, and fit my hand. The .38mm pens threw me at first: they seemed like they would be too fine. The following picture shows some of them writing: 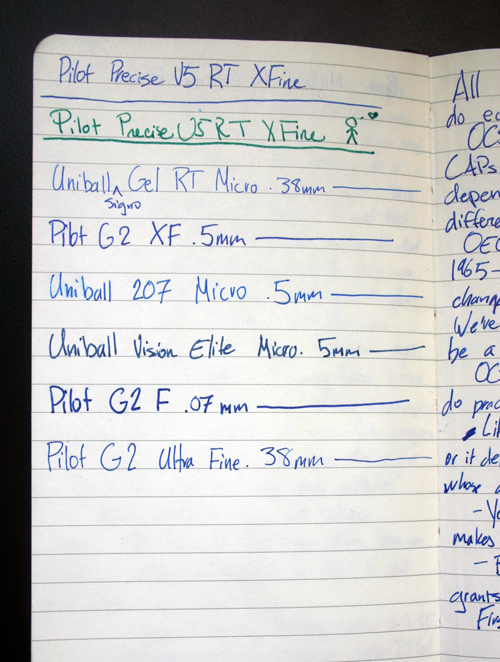 The picture doesn’t convey the thickness of the lines well, but it was obvious that the Pilot G2 Fine .7mm (not pictured among the contenders) was too thick for my purposes. The Pilot Precise wasn’t a gel pen of the sort that seems superior to the others, and the Uniball Vision Elite suffered the same problem: it spread over my moleskine notebook like blood. The Pilot G2 Extra Fine .5mm seemed a tad thick. At the end, I realized that the Signo Extra Micro .38mm, G2 Ultra Fine .38mm, and the 207 Micro .5mm were the best pens of the bunch. Japanese pens seem to be the winners: both Sanford Uniballs and all Pilot pens I tested were made in Japan and seemed to be the best regarded online.

The question: How to choose among them?

I couldn’t decide. All seemed like strong contenders. I didn’t like the 207 Micro housing as much, but it did produce a lovely sky blue color. The Pilot G2 .38mm ultimately seemed darker than I wanted. By process of elimination, I’m going with the Signo RT .38mm for now. For a while I tried swapping the 207 Micro housing with the Signo RT housing, which worked, but I’m not sure I wanted to stay with the .5mm. Thinness counts if I’m going to have any real chance at legibility, and although the .5mm and .38mm were indifferent for most note taking, writing in books with smeary pages made the .38mm shine. I could use one pen for notebooks and another for bound books, but that sounds like more hassle than it’s worth to me. I’ve now been using the Signo RT .38mm for about three weeks, and over the last month I’ve spent about a week with the Pilot G2 .38mm. The two are so close that I could be happy with either, so the .38mm wasn’t far from a coin toss. In the end, I could only pick one.

All the pens survived well. Most packages claimed that the pens would resist alteration. Although I’m not sure what a determined counterfeiter could do, but in these tests by Jet Pens simple water won’t make the ink run. I tried my own test with the finalists and found the same. In addition, Jet says that “The Uni-Ball line is known for its quick drying and waterproof characteristics, making it a favorite among artists.” I’m not an artist, at least in the visual sense, but I do appreciate quick drying and a narrow tip. The Signo RT meets those requirements, and it’s my go-to pen for the foreseeable future.