EDIT: Unicomp now offers a SpaceSaver M keyboard, in which the “M” stands for “Mac.” That’s probably what you want, rather than the Customizer, since the mechanical keys on the SpaceSaver M are the same as they are on the Customizer, while the keyboard itself is considerably smaller and includes Mac-specific keys out-of-the-box.

My Product Review of the Unicomp Customizer keyboard is the most enduringly popular post on this blog, and the last few days have seen an especially large amount of traffic thanks to an NPR story on how an Old-School Keyboard Makes [a] Comeback Of Sorts, which talks about Unicomp. The saddest part: the company is laying off workers because the Customizers and similar keyboards last too long and cost too much. The latter, of course, has a great deal to do with the former, but economic conditions mean that the initial investment apparently isn’t available to many people.

Aside from the durability of its products, Unicomp also has unusually good customer service. I use a Mac and the Customizer ships with Windows keys by default, which one can see in my original post. For $10, however, Unicomp sent me custom keys with “option” and “command” instead of Windows buttons (pardon the fuzzy pictures: I only have a lousy cell phone camera at the moment): 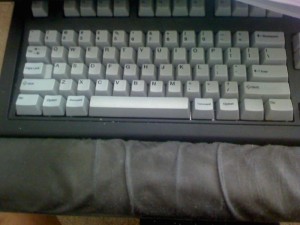 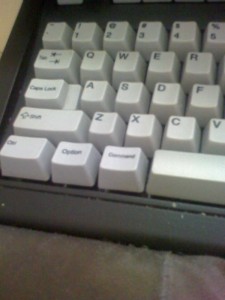 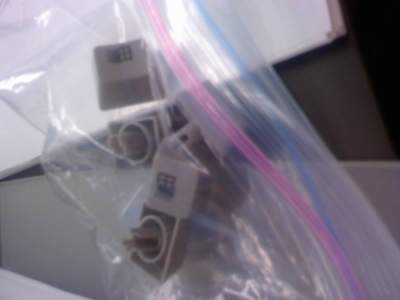 Perfect: the Windows buttons aren’t staring at me and other people who use my computer aren’t confused (“Hit command-w to close the window.” “Where’s command?” “The one with the Windows logo to the left of the spacebar.” “Huh?”).

Mac users who care about typing, take note: buy a Unicomp SpaceSaver or SpaceSaver M rather than the lousy Matias Tactile Pro 2. You can find Unicomp’s website here.